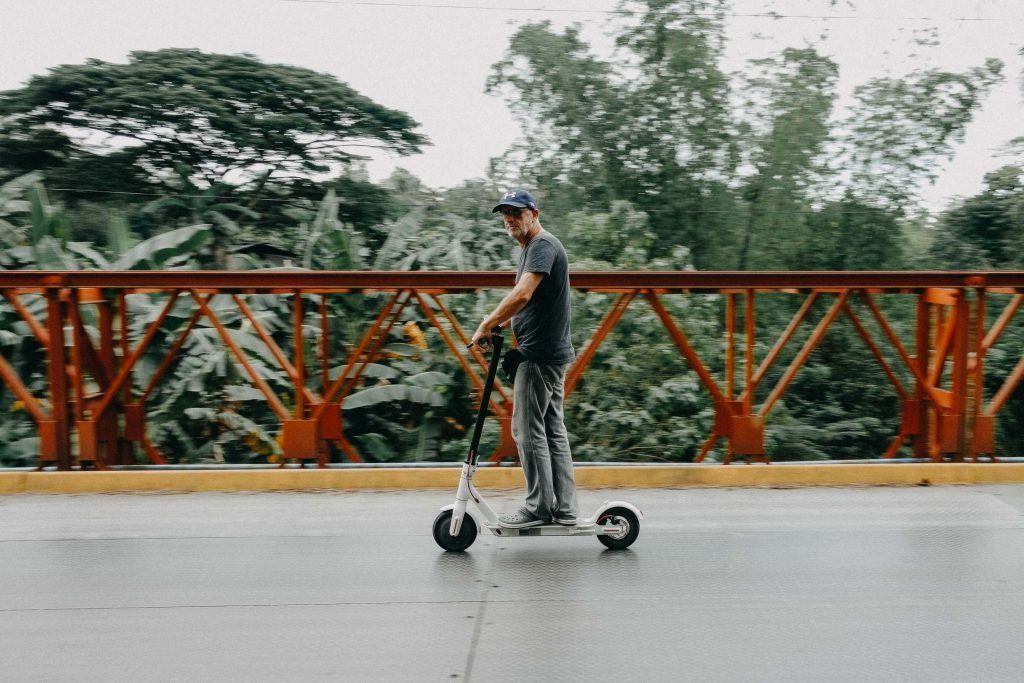 Electric scooters (e-scooters) are gaining popularity in almost every major city in the United States and worldwide. Many people are using e-scooters to take short trips in urban areas as an alternative to bikes, cars, and buses.

They are popular among the younger crowd because of their affordability and convenience.

What are Electric Scooters?

E-scooters look like a larger standup scooter, except they have an electric motor and hand brakes. These battery-operated vehicles weigh about 40 pounds and can reach speeds of 15 miles per hour.

Similar to bike sharing, scooter sharing is mainly for commuting. It’s designed to travel short distances, such as riding from the bus station to the office or to a location about 10 to 15 minutes away.

The Start of Rentable Electric Scooters

Inspired by Uber and Lyft, scooter companies Bird, Lime, Scoot, Skip, and Spin started populating city’s sidewalks across the country in 2017 with rentable electric scooters as the next step to the transportation revolution.

Santa Monica, San Diego, San Francisco, San Jose, and Oakland were some of the first cities in California to embrace the e-scooter phenomenon. However, ridesharing electric scooters didn’t hit the Sacramento market until February 2019, when Jump, the same company that introduced electric bikes to Sacramento the year before, rolled out its first 100 fleets of electric scooters.

The video below discusses how local officials and residents throughout the United States deal with thousands of electric scooters on our streets.

Riders can easily access any scooter using the company app on their smartphone. Through the app, riders can locate the nearest scooter and reserve it. Riders will use the app to digitally unlock the scooter and ride to their destination. When they are done with the scooter, they park it at a designated scooter or bike rack and digitally lock it. For cities that don’t have designated racks, riders can just drop them off at any location to create a risk for pedestrians or vehicles. The scooter companies keep track of the e-scooters through GPS.

Compared to other ridesharing services, e-scooters are cheap to rent. It's free to unlock through Jump, then it costs 15 cents a minute after that. Other scooter companies charge $1 to unlock and 15 cents a minute. For instance, a two-mile ride that takes about 10 minutes will cost $2.50.

E-scooters are a great sustainable way to get around the city. Not only are they fun, affordable, and convenient, they also promote a healthy and active lifestyle. They can also help reduce traffic congestion, emissions, and parking issues.

The Dangers of Electric Scooters

On the flip side, e-scooters also pose a risk when being ridden carelessly. Accidents involving e-scooters can be deadly if the rider falls off or if the scooter malfunctions. The potential of serious injuries is remarkably high if scooter operators:

Like all other personal transportation, e-scooter operators must obey traffic laws and the general rules of the road. The e-scooter laws in California state that riders:

California could cap the number of scooters being rented in the cities and apply harsher penalties for anyone breaking the law.

Although California requires riders to be at least 16 years old, some cities like Sacramento and Los Angeles require that drivers be 18 years or older to operate the e-scooters. Also, California recently passed a law that allows adults to ride without a helmet. Those under 18 must wear a helmet.

People have sustained severe injuries or even deaths in accidents involving e-scooters. Emergency rooms across the country are seeing people with injuries generally associated with car accidents:

While most of the injuries were caused to the riders, pedestrians were also injured when they trip over scooters left on sidewalks or when the riders crash into them.

According to reports, electric scooters have been blamed for over 1500 injuries and deaths in the United States since 2017. Below are just some of the notable accidents and fatalities:

An Uptick of Electric Scooter Injuries and Deaths

Researchers believe there are two main reasons why these injuries or deaths are happening:

When some of these accidents occur, the fault isn’t always on the rider. Some accidents are due to scooter malfunction, such as the brakes not working or the throttles sticking.

In the video below, emergency room doctors are seeing an increase in injuries occurring from electric scooters.

What Do I Do If I Have Been Injured on an Electric Scooter?

If you’ve sustained severe injuries in an accident involving a motorized scooter, there are a few steps you need to take immediately:

Who Is Responsible for an Electric Scooter Accident?

The scooter companies may be held liable if they fail to comply with city laws, such as not providing designated parking racks. However, the scooter rider will likely be held responsible for failing to park or operate the scooter properly.

If the rider sustained injuries in an accident due to a scooter malfunction, the rider could hold the scooter company responsible for any resulting damages. If it was due to a traffic accident, the rider would likely hold the driver liable.

Like in any other traffic accident case, the legal concept of negligence usually applies when building a case to hold another driver liable for the accident. The injured party must establish these four components:

If successfully proven that the scooter accident led to injuries that required medical treatment, the injured party could receive financial compensation to help pay for any costs that result from the accident. This may include past and future medical bills and past and future loss of income. Contact a personal injury lawyer in Sacramento for more information.

According to the current California state law, electric scooters are legal but with a few restrictions:

Can you ride electric scooters on the sidewalk?

The law varies from state to state. However, in California, electric scooters are not permitted on sidewalks unless riders leave or enter a property.

Where can I find electric scooters?

You can find them in the same racks designated for electric bikes in downtown Sacramento and West Sacramento. The only difference between renting the scooters in Sacramento and other cities in California is that you can't leave the scooters on the sidewalks. They must be put back on the racks.

How do I rent an electric scooter?

You'll be able to rent a Jump electric scooter using the Uber app. Through the app, you can locate and reserve the closest scooter in your area. When you get to your scooter, use the app to digitally unlock it and ride to your destination. Once you are done riding, simply put the scooter back on the rack and digitally lock it with the app.

Which electric scooter is the best?

There are many great electric scooters on the market that range from affordable to very expensive. Depending on your budget, you can find a great one at a reasonable price. We'll mention three of the best, starting with the least expensive:

Which electric scooter is the fastest?

The fastest electric scooter is the NanRobot LS7. This scooter can top speeds as fast as 52 miles per hour. It has two independent high-speed motors that provide enough power to climb hills and enough battery capacity to go about 56 miles.

What electric scooter does Lyft use?

As electric scooters become more mainstream, the number of scooter-related accidents is expected to increase. If you have been involved in an electric scooter accident and suffered severe injuries - whether caused by a scooter malfunction or by another driver - you may be entitled to monetary compensation for your injuries. You will need an experienced personal injury attorney to help you achieve the best outcome. Call us at (916) 921-6400 or (800) 404-5400 for free, friendly legal advice.