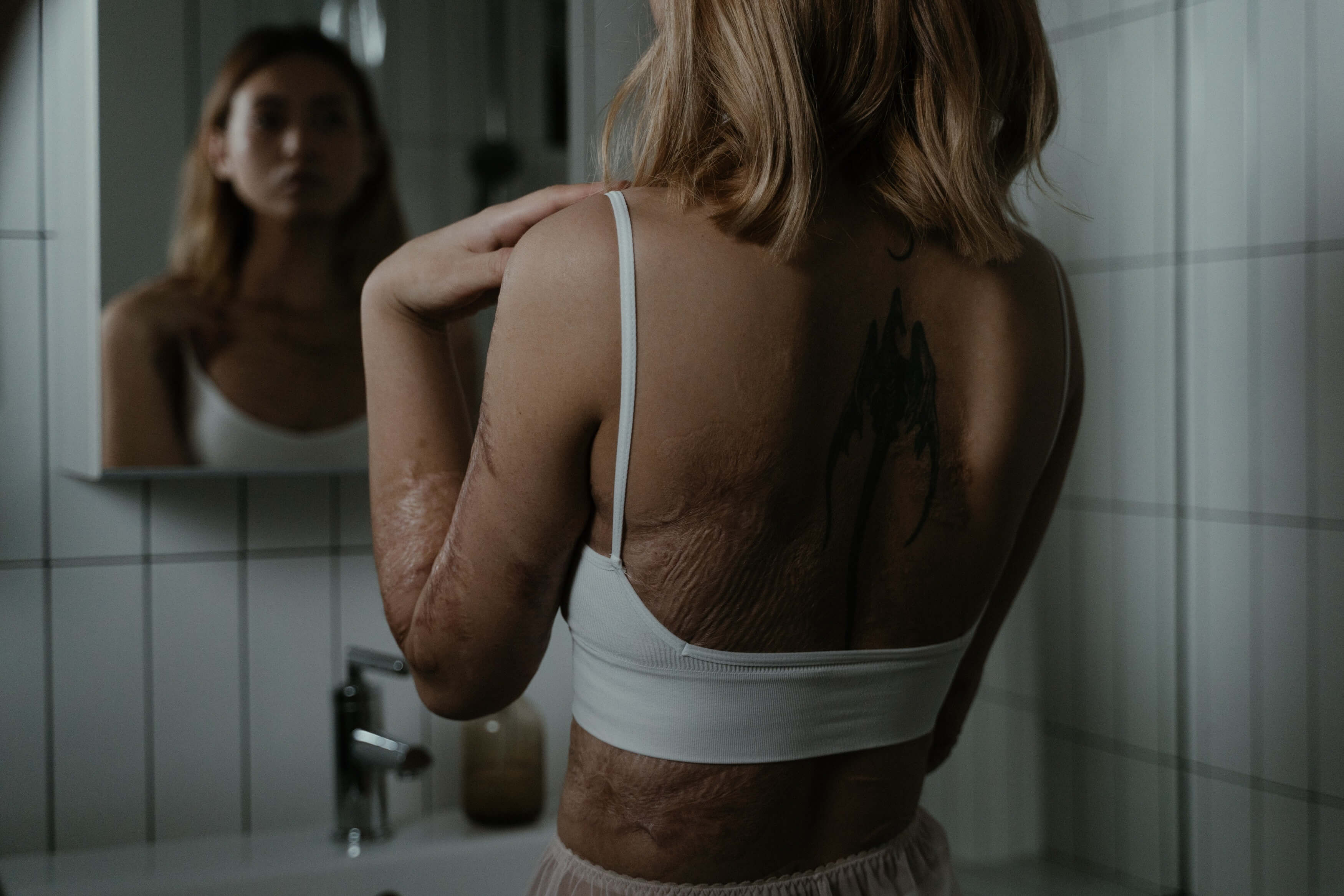 Every year in the US, there are 1-2 million burn injuries seen by doctors and emergency rooms. Facial burns take up many of those burns. In facial burns, there are often many specialty doctors involved so that the patient can maintain airway patency, corneal protection, oral incontinence, and other aspects of facial comfort, appearance, and function. The idea is to minimize the deformity of the face by making the patient have a near-normal look again.

The skin comprises three primary layers, including the epidermis, the dermis, and a fatty layer beneath it. The purposes of skin are to perform thermoregulation, immunological protection, protect the area from trauma and UV radiation, and control insensible water loss. The epidermis is the outer layer that contains no blood vessels. It is dependent on nutrition entirely in the vascular dermis.

What is Facial Burn Injury?

A facial burn injury can happen from a thermal burn, such as a fire, or a chemical burn, such as acid or lye. Each type of burn is treated slightly differently and has a different outcome. Burns, as a rule, involve the destruction of the cells of the skin and sometimes deeper structures like the fascia, muscle, and bony tissues.

Burns are identified by their depth or “degree.” A first-degree burn is the most superficial. The damage is confined to the skin area known as the epidermis. It can be a flash flame burn, a scalding injury, or even a sunburn. The burn remains dry and has no blisters. There is usually no residual scar, and healing occurs over 10 days or less.

A second-degree burn is also called a partial thickness burn. It burns the epidermis and a part of the dermis, leading to a painful area that blisters. It can be caused by flame, hot liquids, or hot solids. Chemicals can cause painful wounds as well. The burn tends to be red and inflamed. Most spontaneously re-epithelialize from leftover epithelial cells in the skin and take about 10-14 days to heal. It does not need any grafting. Deeper partial wounds may take up to 30 days to heal and can get infected, turning them into a full-thickness injury.

Third-degree burns or “full-thickness burns” wreck the epidermis, the whole dermis, and sometimes the deeper layers of tissue. They do not hurt because of the loss of the nerve endings in the burned tissue. They can occur because of an association with hot liquids, flame, hot solids, electricity, or chemicals. It is a dry, leathery burn that is gray, white, green, or translucent. It eventually turns brown or black. With facial burns of this depth, surgical intervention is required to replace lost skin through a skin graft.

Facial burns are always traumatic, but they can be caused by many different things:

Burns is measured by the “rule of nines,” which tells the doctor what percentage of the body is injured. This measurement is just as important as the depth of the wound. The rule of nines is adjusted somewhat for babies and small children who have different proportions than adults. The calculation is based on the number of body parts, about 9 percent of the total body area of one hundred percent.

The rule of nines is this:

If the burn involves more than 15 percent to 20 percent of the body area, there can be significant fluid losses and the presence of shock. IV fluids are indicated whenever large areas of 2nd and 3rd-degree burns are involved. According to the Parkland Formula for traumatic burn fluid loss: 4 ccs of fluid per kilogram per percent of burn is equivalent to the fluid given in the first twenty-four hours, with the first half given over 8 hours. This involves about 8000 ccs of liquid in a 175-pound person with a 25 percent burn.

Signs and Symptoms of Facial Burns

The signs and symptoms of a burn depend on the type of burn. For example, a superficial first-degree burn will be dry and red. It will be perceived as fairly painful. The skin is red but will blanch and turn white when one presses on it. There may be some swelling of the skin. There are no blisters and no insensible fluid loss. This is a burn that looks a great deal like sunburn. It tends to fade over 5 days.

A superficial, partial thickness, a second-degree burn is moist with a weeping red base. The epidermis can separate from the dermis, causing a fluid-filled blistery wound. The area blanches from red to white when you push on it, and the sensation of air on the wound leads to increased pain. It should be kept cool because heat makes the pain worse. It is one of the more painful burns because the nerve endings are raw and not burned up as in a third-degree burn.

The blisters are generally quite loose and easily removed in a deeper partial-thickness burn (a deep second-degree burn). The remaining skin might be moist or a waxy dry. The skin color is a patchy blend of red to white, and the skin doesn’t blanch regardless of the amount of pressure put on it. Depending on the amount of nerve damage, it may or may not be painful; however, the patient may feel pressure when touched.

In a full-thickness burn, the skin looks gray, like leather, white and waxy, or charred and blackened, depending on the type of burn. If any nerve endings are damaged, the only sensation the patient feels is that of deep pressure on palpation.

It’s important to quickly look at the cause when treating a facial burn. Prompt treatment is vital in lessening tissue destruction. You need first to think of first aid for facial burns.

When a burn has been completely cooled, use a fragrance-free lotion or moisturizer to prevent drying if the wound is very minor. If the wound is more serious, such as a partial-thickness or full-thickness wound, call 911 or seek medical attention.

Don't remove clothing stuck into the burn until you seek medical attention for severe burns. Don’t expose the burn to further heat and smoke. Don’t soak the burn in water but instead cover it with a moist, sterile gauze or a clean, moist cloth. If the burn is part of a severe injury, make sure that the person has an intact airway and that you have started CPR if this is proven necessary. If the wound is more than minor, seek medical attention immediately.

Do I Need to Be in the Hospital?

Sometimes the decision is made to put the patient in the hospital. There are several reasons a doctor might decide to hospitalize a patient with a severe burn. In part, it depends on the depth and extent of the burn. The other factors include:

Skin grafting is essential for deep partial-thickness or full-thickness burns. It involves scraping a lattice of skin off of an unburned area. The latticed area stretches nicely to cover the burned area. Then the lattice is then stapled to the burn. It promotes faster healing because it is already partially covered by the patient’s skin. In some cases, cadaver skin needs to be used to temporarily cover the burned area, but it doesn’t last; it is just a temporary measure to protect the burned tissue so it can eventually heal itself.

Facial burns can be fraught with complications if not treated carefully. The biggest complication of facial burns is scar tissue. Depending on how the wound heals, there can be no facial scarring or deep ridges and scars within the skin. It can cause a deformed mouth, nose, or eyes due to poor healing.

Infection is also possible. A bacterial infection of the burn can remain at the sight of the burn and cause poor healing and scarring. It can also spread through the burned skin to infect the bloodstream. When this happens, it becomes septicemia or sepsis, which is very dangerous and life-threatening. It can result in organ failure, shock, and death.

If a burn is big or moist enough, it can leak fluid from the body and cause hypovolemia. Severe hypovolemia turns to shock, and this is a symptom that can be life-threatening if not treated aggressively.

A facial burn especially can lead to breathing problems from smoke inhalation. In the early stages of a burn, the doctor doesn’t know how much smoke the patient has inhaled, so he must err on the side of caution and use oxygen or intubation if it appears the patient is low on oxygen.

Hypothermia can happen if the patient loses too much heat through the damaged skin. This is a bigger problem if the wound is large but can occur on full-thickness facial burns. The body cannot maintain its temperature if too much skin is lost.

Joint problems around the jaw can happen with facial burns, especially if the patient doesn’t exercise their mouth after the burn. The patient needs to do physical therapy to keep the jaw muscles and joints moving.

A severe burn is a catastrophe. Anyone who has a severe burn thru the negligence of another should contact an experienced catastrophic injury lawyer.

The following video provides an understanding of a burn injury. It discusses the different types of burns and how they are treated.

If you or a loved one has suffered a facial burn injury as a result of someone else's negligence and would like to discuss your case with a skilled Sacramento Personal Injury Lawyer, contact us online or call us at (916) 921-6400 or (800) 404-5400 for free, friendly advice.

Editor’s Note: This page has been updated for accuracy and relevancy [cha 4.25.22]