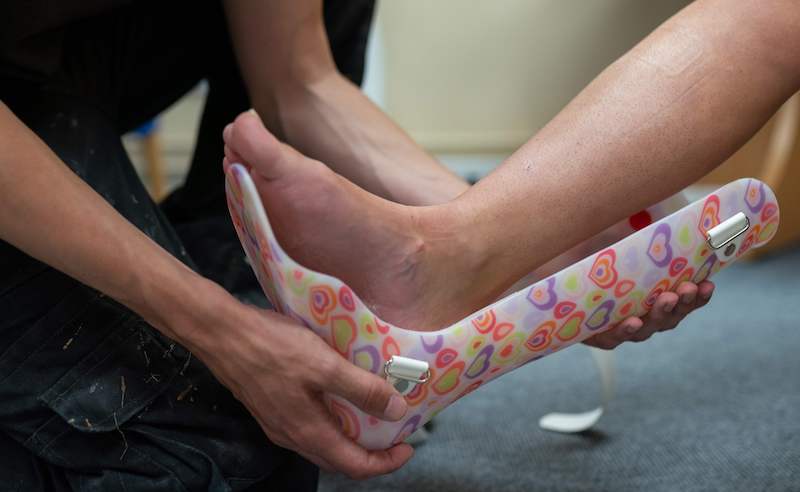 An ankle sprain involves twisting an ankle, resulting in a painful and swollen joint. The swelling comes from stretched or torn ligaments of the ankle. While ankle sprains are common, they are not always considered to be minor injuries.
A person can have a severe sprain or multiple minor sprains that lead to having chronic pain in the joint and joint laxity and weakness. This is why it’s important to treat a sprained ankle so it doesn’t lead to long term ankle problems.

What is an Ankle Sprain?

There are three kinds of an ankle sprain. They include the following:

Ankles sprains can be mild or can be severe. It depends on the ligament and its degree of damage and on how many ligaments have been damaged. In a mild sprain, the ankle is swollen, stiff, and tender but it feels relatively stable and you can walk on it.

A moderate sprain may show some bruising along with tenderness and swelling. The ankle may even feel a bit unstable. In a severe sprain, it is difficult to walk on the ankle because of instability and there is a great deal of bruising, swelling, and tenderness.

Ankle sprains can be any one of three degrees. These include the following and can occur with any type of ankle sprain.

This type of sprain occurs when the ligaments have been somewhat stretched but not torn. These are the primary symptoms:

This is the worst kind of sprain you can get in the ankle. The ligament has been completely torn. The major symptoms include:

Causes of an Ankle Sprain

Ankle sprains are caused by rapidly shifting your leg movement with your foot planted in one spot. It can also happen when your ankle shifts to one side or the other with your whole weight on it. The supporting ligaments stretch in some cases and break in others. Common causes of ankle sprain include:

Symptoms of an Ankle Sprain

The symptoms of an ankle sprain tend to be worse the more that the ligaments have been affected. A completely torn ligament will lead to the worst and most obvious symptoms.

An ankle sprain can be difficult to diagnose because a plain film x-ray won’t show anything abnormal. A plain film x-ray, however, will show whether or not the injury was a fracture or a sprain in most cases.

If there is some question that the injury might be a fracture, an MRI of the ankle can be done, which will show soft tissue injuries such as ligamentous tears and any occult fractures that might be present.

The diagnosis is therefore based on a careful history and physical examination. The doctor stresses the ankle and looks for areas of bruising to see if the ligament has been left intact or not.

Treatment of an Ankle Sprain

There are simple, first-aid remedies for a sprained ankle that everyone should have shortly after suffering an ankle sprain. These include using the RICE treatment, which involves the following choices:

Most ankle sprains are treated conservatively. If it is a first-degree sprain, wear an orthopedic walking boot for at least two weeks and use crutches for at least a week. Use the RICE method as directed above.

Casting or braces allow you to ambulate with or without crushes. Bandages are less successful but they can compress the wounded area and keep swelling to a minimum.

If the exercises are done correctly, they will prevent chronic pain and re-injury to the ankle in the future. Exercises can be done using the air cast or below the knee cast and are proven substantially better at preventing re-injury than the compression bandage.

In one study, ankle exercises that focused on activation of the ankle, sensorimotor control, and strengthening were carried out for twenty minutes three times daily. Patients also rested the first few days after the injury. Almost all injured persons healed completely.

Ankle exercises bring the ankle through its complete range of motion using ankle circles. Another exercise has the individual draw the letters of the alphabet with the toes through the air. Eversion exercises with prevent an inversion injury and vice versa. Stretching between exercises is important. Balance is worked on by balancing on the affected foot. One exercise has the person go on tiptoe on the affected foot. Some physical therapy devices are used to strengthen the ankle.

Agility exercises include squat jumps and power skipping and are done after the ankle has regained its strength.

Most people recover after a couple of weeks but the pain and instability last for up to a year in up to 30 percent of patients. Patients can have ongoing instability and re-injury if the sprain is not treated properly.

If you or a loved one has suffered an ankle sprain injury as a result of someone else's negligence and would like to discuss your legal options with an experienced Sacramento Personal Injury Attorney, contact us online or call us at 916.921.6400 or 800.404.5400 to set up a FREE consultation.

Editor’s Note: This page has been updated for accuracy and relevancy [cha 10.14.20

Photo by ThisIsEngineering from Pexels