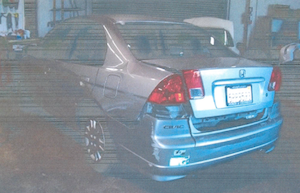 Here are two photos of vehicle property damage for two cases we previously handled. Can you tell by the photos which client sustained the greater injury? Well, the client in the top car walked away with a few bruises and glass scratched. The client in the bottom car suffered a cervical disk injury with disk replacement surgery. That case went to verdict, and the jury awarded over $4 million. 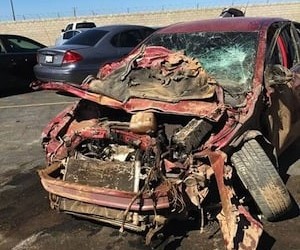 So, what are some of the factors that determine the severity of an injury? There are literally hundreds, but here are a few of the more important ones:

The Angle of the Collision

The collision angle plays a big role in what forces the neck to experience and damage tissue. For example, a head-on crash is typically less harmful than a collision from an angle where the spine may be twisted.

The Speed and Weight of the Rear Car

The heavier the rear car and the faster it is moving, the more force is directed into the occupant in the front car.

The Speed and Weight of the Front Car

If the front car is large, there may be little apparent damage to the vehicle. However, a smaller can experience much more acceleration even if the impact is minor. More acceleration equals a greater chance of injury.

The Condition of the Road

The amount the car moves after impact is critical, and an accident on ice or gravel is likely to be more serious than one on dry asphalt pavement.

Where Was the Injured Victim Looking?

A turned head will expose the victim to more stressors and increased injury risk.

Women have a much higher chance of chronic neck pain than do men.

Occupant Awareness of the Impact

Sometimes, being braced can lessen the chance of injuries. However, bracing of arms and legs can lead to injury in those areas of the body.

If the headrest is too low, it can act as a pivot for hyperextension.

Were Seat Belts in Use?

Typically seat belt use decreases the chance of a serious head injury but increases cervical and lumbar strains.

Can complicate the injury patterns.

History of pre-existing spinal degeneration or headaches can complicate healing.

People who report pain onset immediately are more likely to have long-term problems down the line.