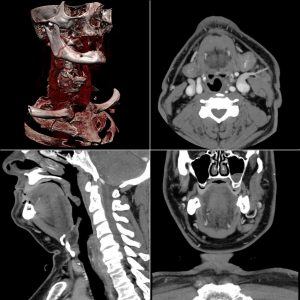 I’m Ed Smith, a Sacramento Personal Injury Lawyer. The neck is one of the most important structures in the body because it contains the esophagus, the trachea, and important blood vessels that carry oxygen and nutrients from the body to the brain; however, the neck is also an exposed structure, making it vulnerable to injury in traumatic accidents. A recent literature publication was put together discussing a case of a catastrophic injury that an individual sustained in a serious accident.

The Important Structures of the Neck

One of the vital parts of the body, the neck is home to a number of important structures that must be protected to ensure a good quality of life. Some of these structures include:

Esophagus: The neck is also home to the esophagus. The esophagus is the long tube that transmits food from the mouth to the stomach. It uses rhythmic contractions to force food into the digestive tract so that the nutrients can be absorbed and used to feed the various functions of the body. Disruption of the esophagus can lead to stomach acid spilling into the subcutaneous tissues.

Trachea: The neck also contains the trachea. This important structure connects the nose and mouth to the lungs. The trachea transmits oxygen from the outside world into the lungs and helps to expel carbon dioxide from the lungs into the open air. The trachea is a vital part of survival because without it people could not breathe.

A recent case report was published detailing a unique injury that someone sustained to their neck that resulted in life-threatening injuries.

A Unique Crush Injury to the Neck

A young child was a passenger in a vehicle that was traveling down a local highway at high speeds. The driver stated that an animal walked into the street and he took evasive action to try and avoid the animal. He lost control of the vehicle, which flipped, leading to a serious single-car auto accident. When the vehicle flipped, it rolled over multiple times and came to rest as it smashed into an embankment and tree nearby. While the driver sustained a handful of traumatic injuries, his injuries were relatively minor; however, the child had sustained a catastrophic personal injury and was having difficulty breathing due to debris collapsing on top of his throat. Emergency personnel quickly arrived on the scene and evaluated the child. He was having significant respiratory distress and was intubated on the scene.

The Recovery Process from a Crush Injury

The child was transported to the local hospital; however, his neck appeared to have increased in size. There was an air pocket forming around the base of his neck that got the attention of the local physicians. He was taken for imaging which revealed that he had a disruption of his trachea and air was leaving the trachea, forming that air pocket that was felt on the original examination. The young boy was taken to the operating room for emergent surgery where his trachea was quickly repaired. The child spent an extended amount of time in the ICU before finally being discharged home where he made a full recovery. This case highlights the serious nature of crush injuries to the neck that can occur in car crashes.

With the Help of an Attorney

When children sustain serious injuries in accidents, it can place families, particularly the parents, under significant stress. Problems that might come up include:

Missed School: Children who sustain neck injuries could end up staying in the hospital for many days in a row. This means that they could have significant amounts of work to make up. Too many missed days could lead to the repetition of the grade.

Logistical Problems: If one parent has to stay in the hospital with one of the children, the other parent could have to go to work, run errands, and take care of the siblings. This could be a major logistical problem.

Financial Concerns: When health insurance companies receive the bills for injuries sustained in car accidents, they could hesitate to honor claims. When parents have their claims denied, they may be wondering what to do next. What is a family supposed to do to make ends meet?

In tough circumstances such as these, it is a good idea to speak with an experienced personal injury lawyer in Sacramento to review all of the options available.

I’m Ed Smith, a Sacramento Personal Injury Lawyer. When someone sustains a crush injury to the neck, they can develop serious consequence as a result and require emergent medical care. Once this has been taken care of, families should feel welcome to reach out to me for free, friendly advice. Call me today at 916.921.6400 or (800) 404-5400.

I belong to the Million Dollar Advocates Forum for injury attorneys who have obtained verdicts for cases worth amounts in excess of $1 Million Dollars.

Please take a glance at some of my verdicts and settlements here.

Take a look at Avvo (a ranking site for lawyers), Yelp, and Google to look over reviews from some of my past customers.

Image Source: This CT scan was located first on Wikimedia Commons and has been shown here under the CC license, version 3.0.