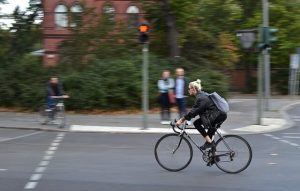 Bicycle accidents frequently occur in the Rio Linda area.  In fact, they happen regularly throughout California and the entire country.  The National Highway Traffic Safety Administration (NHTSA), which tracks statistics on roadway accidents, reports close to 800 fatal bicycle accidents in the U.S. in 2017. Of those, 124 occurred in California - our state is near the top for the number of bicycle accident fatalities in the 10-year period from 2007 to 2017.  When an accident occurs, an experienced Rio Linda bicycle accident lawyer can help.

Any time a cyclist is hit by a vehicle, severe injuries are a real possibility.  While the bicyclist may be wearing a helmet, the lack of other bodily protection can result in many types of injuries, some of which are listed below:

Common Scenarios that Cause Bicycle Accidents

Vehicle driver negligence often is the cause of Rio Linda bicycle accidents - whether they occur on a large street such as Rio Linda Boulevard or Elkhorn or on a smaller side street.  The driver's negligent act could be a failure to look before changing lanes or executing a turn, sideswiping a bicyclist, or opening a door in the path of an approaching cyclist.  Other times, the accident may occur because the driver did not provide the cyclist the mandated three feet while attempting to pass.

California Vehicle Code § 21670 mandates that California motorists must allow a space of at least three feet between their vehicle and a bicyclist when the motorist wishes to pass the bike. Further, the law states that if the vehicle driver cannot maintain at least three feet while passing, they must slow to a prudent and reasonable speed and may only execute the passing maneuver when it is safe to do so.

If a driver is negligent and causes a bicycle accident, they should be held responsible for the cyclist’s injuries.  A skilled Rio Linda bicycle accident lawyer can help the injured party file a claim, deal with frustrating insurance adjusters, ensure that important evidence is preserved, and maximize the bicyclist’s economic recovery.

Watch the YouTube video that takes a look at California's Three Feet for Safety rule.

Steps to Take After an Accident

If you are not incapacitated by your injuries, there are a few things that you should do at the scene of a bicycle accident.  If you are seriously injured, the police will likely respond to the scene to gather some of the necessary information.  If you are able, the following is a list of things that should be collected following the accident:

After the information is exchanged and pictures are taken, it is important to seek medical treatment, even if you believe that your injuries are minor and can be treated at home.  Many times, you may be more injured than you realize.  Head injuries, internal injuries, and soft tissue injuries may not be immediately apparent.

After you have been evaluated and treated by a medical professional, it is recommended you consult with an experienced Rio Linda bicycle accident lawyer to preserve your legal rights to recovery.

Monetary Compensation After a Bicycle Accident

Most of the time, the injured bicyclist will be able to begin a claim for monetary damages against the negligent driver.  This process begins with the driver’s insurance company.  A claim can often be settled before a lawsuit is filed, but if the insurance company is being difficult, the case must be filed in court before the second anniversary of the accident.  This two-year statute of limitations is the most common time limit. However, if the driver was in the course of employment with a public entity, or if the cyclist was under the age of 18, there are other, potentially much shorter, deadlines that apply.  This is another reason it makes sense to promptly consult with a Rio Linda bicycle accident lawyer - to ensure your legal rights are protected.

Some of the recoverable damages in a bicycle accident claim against a negligent driver are:

An injured bicyclist will have the option to pursue an insurance claim without legal representation. However, it is not advised, especially if the accident and injuries were severe.  The goal of the insurance adjuster with whom you will be speaking is to keep as much money in the pockets of the insurance company as possible. That means they intend to short-change your claims for damages.  With an experienced attorney behind the wheel, in the vast majority of cases, the injured person will end up having a larger recovery than if they had handled it alone.  Insurance adjusters will begin calling you shortly after the accident and attempting to get you to settle your claim quickly - even before the long-term effects of your injuries are known.

I’m Ed Smith, a Rio Linda bicycle accident lawyer.  If you or a loved one has been injured in a bicycle accident, don’t hesitate to call my office for free and friendly legal advice.  Our local number is (916) 921-6400, and if you are calling from outside the area code, we have a toll-free line: (800) 404-5400. Another option is to fill out our contact form online.

Since 1982, I have been advocating on behalf of injured Rio Linda residents.  When considering hiring an attorney, it is helpful to see what prior clients have to say.  There are many client reviews for our firm posted on Avvo, Yelp, and Google.  Our Settlements and Verdicts page will show you some of our past case results.

Image by Mihai Surdu from Pixabay