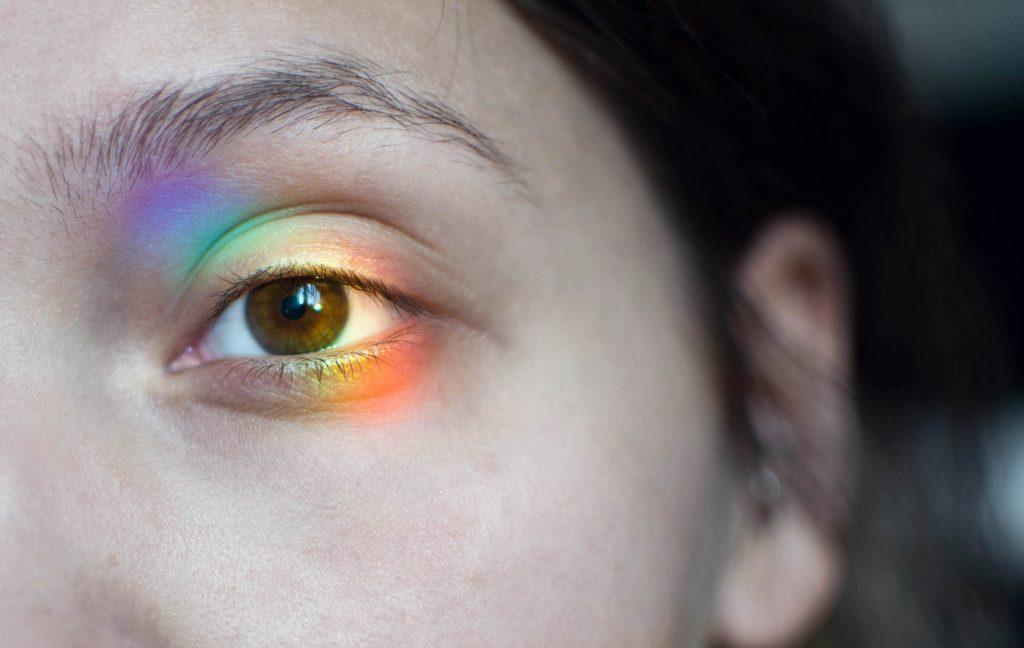 Retinal tears due to trauma are the result of the transmission of an external force to the eye with distortion of the eye.  The shape of the eye can change drastically after a blow.  Since the cornea and sclera of the eye are relatively inelastic, the globe cannot stretch in response to being deformed.  When a force is suddenly applied to the eye, the volume of the eye must remain relatively constant since the outflow of fluid cannot increase fast enough to absorb the volume displacement.  The net effect is a change in shape but not in the volume of the eye.  This can produce traction on a number of structures, include the vitreous base of the eye, where the vitreous is normally firmly attached to the peripheral retina.  This where the retina tears.

Retinal breaks can also occur at the site of focal vitreoretinal attachment, such as the edge of lattice degeneration or a chorioretinal scar.  The second type of retinal tear stems from fragmentation and tissue death of the retina at the site of direct trauma to the sclera.  These tears usually occur in the relatively unprotected temporal retina.  Retinal tears associated with direct trauma to the retina are often associated with intraretinal hemorrhages and retinal edema, often producing large, irregular retinal tears.

The trauma usually results in an immediate retinal tear, although the tear may be delayed if it comes from cellular proliferation on the retina or to tissue death of the traumatized retina.  The interval between the eye contusion and the retinal tear or detachment may be prolonged.  In one study, the interval between the injury to the eye and the discovery of a detachment was five years with a range of between 1 and 27 years.  In other studies, 12-20 percent of traumatic retinal detachments were detected within twenty-four hours after the injury, 30-46 percent were found within a month, 50-60 percent within 8 months and 80-82 percent were found within two years of the injury.

Traumatic retinal detachments tend to occur in younger individuals, with 80 percent occurring under the age of 40.  There tend to be more males with retinal detachments when compared to females.  Myopic eyes appear more likely to develop a retinal tear or detachment after trauma.

How Does Retinal Dialysis Happen?

Retinal dialysis occurs when the retina separates from the border of the nonpigmented pars planus epithelium at the ora Serrata.  Most of these situations happen as a result of trauma, although some authors have postulated a genetic predisposition in some eyes.  Many retinal dialyses are completely silent, which accounts for the delay in detecting the retinal detachment.

Patients with retinal dialysis will complain of floaters or mild blurring of vision.  They usually occur at the time of the trauma but some are related to vitreoretinal traction and may not develop until weeks or months later.  To check for retinal dialysis, the peripheral part of the retina must be examined by depressing on the sclera as soon as it is deemed safe to do so.  Occult perforation or rupture of the globe needs to be ruled out first.

The normal serrated contour of the ora Serrata will appear to deviate at the site of the dialysis with blunting of the serrations within the dialysis.  A pigment may be visible at the previous line of attachment of the peripheral retina, giving the appearance of a bifurcation at the border of the dialysis and the normal or Serrata.  Some dialyzes do not lead to retinal detachment but become surrounded by pigmentary changes with a spontaneous chorioretinal adhesion.

Most dialyzes in the absence of retinal detachment should be treated with laser photocoagulation.  Photocoagulation with a three-mirror contact lens is not usually possible because of the peripheral location of the lesion but a laser indirect ophthalmoscope delivery system may be used with scleral depression to surround the dialysis with laser photocoagulation. Most dialyzes should be treated preventatively in order to try to prevent retinal detachment.

What Are the Symptoms of Retinal Detachment?

How Are Retinal Detachments treated?

Retinal detachments secondary to traumatic dialyzes are generally treated with cryopexy and placement of a circumferential scleral buckle to support the dialysis.  Drainage of subretinal fluid can be avoided in many circumstances but may need to occur if there is bulbous detachment or vitreoretinal traction on the dialysis or if the intraocular pressure must be lowered for placement of a broad scleral buckle.

The surgical results of repair of traumatic retinal detachment secondary to detachment secondary to dialyzes are usually excellent.  The rate of retinal reattachment with one operation has been reported as 87-94 percent and, if more than one operation is needed, the rate of reattachment is 96-98 percent. The final visual acuity depends on whether or not the macula was detached or attached preoperatively.  In one study, the visual acuity was 20/40 or better in 44 percent of cases, 20/50 to 20/100 in 24 percent of cases and 20/200 or worse in 32 percent of cases.

Traumatic retinal tears without retinal detachment due to contusion-induced retinal tissue death or traction at the site of a vitreoretinal adhesion occur less frequently than dialysis following blunt trauma.  There are three basic types of retinal tears following direct trauma to the eye:

If a traumatic retinal tear is found more than a month after the trauma and is surrounded by a chorioretinal adhesion, treatment may not be necessary.  These eyes, however, must be followed very carefully because some tears will result in retinal detachment later.  Most retinal tears should be treated with cryopexy or laser photocoagulation.

In the following video, Dr. Joe Alton discusses how to apply first aid treatments to eye injuries and trauma.

I’m Ed Smith, a Sacramento Eye Injury Lawyer. If you or a loved one has suffered eye injuries in a serious accident, you'll need the guidance of an experienced Sacramento eye injury attorney. Call me anytime at 916.921.6400 for free, friendly advice.

Photo by fotografierende from Pexels

Editor’s Note: This page has been updated for accuracy and relevancy [cha 11.8.19]