Why is this important?
Home
Resources
Articles By and About Us
Personal Injury Practice Takes Healing Route 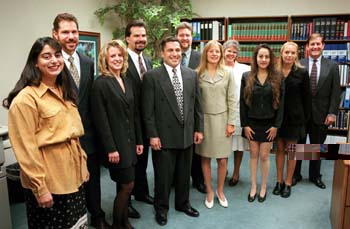 Sacramento lawyer Edward A. Smith has never forgotten the day his mother and father were sued in the late 1950s.

A real estate broker insisted the Smiths pay him after finding a buyer for their house in Brooklyn, N.Y. -- even though the buyer ultimately backed out of the deal.

"My parents were scared to death and really upset by the whole process (of litigation)," said Smith. "They were nervous and unsophisticated and worried about having to come up with money that they didn't have and going to court. The case dragged on for a long time."

The memory of their long-ago fear has been transformed over the years into a kind of guiding principle for Smith's personal injury and wrongful death law practice today.

"I thought there's just got to be a better way, so I try to make my office not feel like a law office," Smith explained, noting that his mother and father, a homemaker and a mechanic, respectively, ultimately lost their case.

In short, the local attorney tries to replace panic with positive possibilities.

"The other side often wants to intimidate, so I see my job as taking the sting out of the trauma of a lawsuit  for my clients," he said.

That simple goal is packed with techniques Smith and his staff use to put clients at ease and cultivate a long-term relationship with them, making his practice one of the more atypical ones in Sacramento.

Meandering through Smith's office near the Arden Mall can feel like a stroll through a garden. There's the hum of a giant aquarium filled with fish bearing names of opposing attorneys, pretty Japanese wall prints, gurgling stone sculptures, photos of sunsets at Big Sur, a conference room painted just the right calming shade of green and Smith's legendary oversized vibrating easy chair -- meant to loosen up people before depositions.

Smith has practiced law since 1983. He insists on gathering a full picture of clients' lives to better represent them. Part of that means he or one of his paralegals gets to know the client's spouse, friends or significant other. He also uses guided imagery exercises or music to help clients relax and describe how their lives have been changed following their injury.

"I can't present their case well unless I know what lights their fire, what scares them, how they're put together," he said.

Smith also shares with them stories about himself -- that he didn't do so well in school, that his parents were working-class people. And, ultimately, he tries to find out what clients really want from their case -- money or revenge.

"When you think of a lawyer, you usually think of someone either really crusty or too professional and slick to deal with for a regular working guy like me," said Mike Elder, a former client of Smith's who was injured in a motorcycle accident three years ago. "The people at Ed's office eased my mind about (my) whole life turning upside down."

Smith has 13 employees -- six are clerical workers and seven are paralegals -- and one contract attorney who works outside the office. Essentially, Smith is the firm's sole practitioner.

"That's unique," said Rae Allen, vice president of policy for the National Federation of Paralegal Associations. "Most law firms are (set up) the other way around with about three to 10 attorneys and only one paralegal. We've heard of this arrangement in a few other offices, all doing personal injury law, and it seems to be positive, but it's hard to say if it would work in every kind of firm."

For Smith's office, however, the paralegal-to-lawyer ratio appears to be the right mix.

His paralegals earn roughly $55,000 a year -- much better than the going salary rate in Sacramento yet cheaper for Smith than hiring senior attorneys.

Smith has trained his paralegals -- some of whom started in clerical positions -- to handle supervised tasks that junior lawyers might do in a larger firm. They spend a lot of time getting to know clients, analyzing medical records, learning human anatomy, writing deposition summaries, drafting arbitration briefs and letters to insurance companies and attending trial lawyer conferences.

"So in a deposition if the opposing counsel asks a question, we can get to the issue or moment in time within two or three computer key strokes," explained Smith, who's a hound for using a variety of research tools.

Smith's office also regularly uses the Internet and some obscure software programs to build cases. One that lists nothing but words and phrases associated with occupations -- helpful as a brainstorming technique -- is among their favorites.

"He's one of the first attorneys in Sacramento to really use the Internet and special databases," said Jessie Morris, a local criminal defense lawyer who first knew Smith when he started practicing 15 years ago. "His practice is incredibly unusual."

Smith's office marks the end of each case with a tradition -- giving clients a bottle of spicy ginger ale or, for drinkers, a bottle of Davis-brewed beer bearing a label that says, "Ed's Luau Lager."

Representing many people who've been hurt in drunken driving accidents, Smith's beer label also includes this caveat: "Contains alcohol which is not good for you. Don't drink and drive."

Copyright Â© The Sacramento Bee
Contact Us
Search
Personal Injury
Client Reviews
★★★★★
"Me and my wife; had a car accident. We were amazed how easy, professional, friendly attorney Ed Smith is along with his staff. Everybody is amazing. Thank you so much, we are very impressed!" Alex & Dinah M.
★★★★★
"Ed Smith and his office team took on a difficult personal injury case on my behalf and for the passenger in my car. Ed is a top- notch attorney. His staff couldn't have been more helpful and kind. No need to look elsewhere. I give Ed Smith my highest recommendation." Beverly
★★★★★
"Ed and Robert have been taking great care of my husband and I for the past 5+ years. They are always there when you have a problem and a quick resolution! Even when the issues have nothing to do with them. They are willing to help ease the pain off your shoulders. They are as good as it gets! Thank you again for everything." Annie T.
★★★★★
"Very professional. Great team, staff and service all around. Mr Smith was very honest, straight forward with his advice. He gives the word "attorney" an honest reputation. I will seek his council anytime, and would recommend him at the drop of a dime." Jeremy M.
★★★★★
"I would highly recommend Ed Smith to any friends or family in need of a personal injury attorney. Ed, and his staff, are very caring on top of being very experienced in this field. The staff always keeps you informed of the status of your case and they are always easy to reach by phone." Shannon D.
★★★★★
"Edward Smith law offices provide competent, thorough, and personable help for victims of personal injury. When you first meet the staff you know you contacted the right office. This law office treats clients like people. I recommend this office to anyone seeking representation regarding personal injury." David M.
View More
Submit a Law Firm Client Review