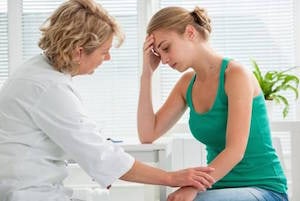 Since all women undergo numerous bodily changes while ovulating during and after menopause, it can be challenging to notice possible signs of ovarian cancer. However, the American Cancer Society urges all women to be proactive because close to 94% of those who discover these cancer symptoms at an early, localized stage may go on and live another five years or more beyond their initial diagnosis.

That data should help remind all women to discuss all symptoms of this cancer during regular visits with their doctors. It’s always best to rule out any form of cancer-related to odd symptoms – rather than wait so long that few treatments can still help you.

Potential Signs of Ovarian Cancer That Should Never Be Ignored

The MD Anderson Center and other leading cancer diagnostic and treatment facilities urge women to question the presence of one or more of the following symptoms:

Diagnostic Tools Use to Determine for Ovarian Cancer

Since obtaining a Pap Smear only reveals whether a woman may have cervical cancer, other tests are sometimes run when reviewing potential symptoms of this disease. Obviously, a physical or pelvic exam alone cannot conclusively determine whether a woman has cancer. Doctors may sometimes screen women for ovarian cancer by running a transvaginal ultrasound (TVUS) and the CA-125 blood test.

Given the limitations of both these tests, the American Cancer Society website notes that they are not recommended by any major professional or medical organizations, except perhaps when the woman has an inherited genetic syndrome involving ovarian cancer. However, even when someone has a potentially higher risk for this disease, there isn’t any conclusive proof that these screening tests can greatly help diagnose the condition.

A small number of women who have mutations in their BRCA1 and BRCA2 genes may be more likely to develop this cancer than others. Likewise, gene mutations linked to other family cancer syndromes may also play critical roles in developing this disease. These include PTEN, STK11, and others discussed in greater detail on the American Cancer Society website.

As for other theories, some people believe that introducing male hormones into a woman’s vagina may play a role in developing this disease. However, more researchers think that there is a more extensive connection between the number of times a woman experiences ovulation. Being pregnant or on birth control pills decreases ovulation. Stated differently, the fewer times a woman ovulates, the lower her chances of developing this cancer.

A recent development is that Talcum Powder made by Johnson & Johnson may have increased the chances of developing ovarian cancer, as will be discussed further herein.

Additional research is required concerning more apparent causes and symptoms of ovarian cancer, multiple gene mutations, and better ways to diagnose and treat this potentially deadly disease. However, it’s now known that a woman’s long-term prognosis with this disease may partially revolve around whether she has developed changes in the TP53 tumor suppressor gene or the HER2 oncogene.

At present, these include surgery, chemotherapy, hormone therapy, radiation therapy, and targeted therapy.

Many women are just now learning that their long-term use of talcum baby powder for feminine hygiene purposes may have significantly increased their chances of developing this cancer. Although this news is understandably frightening, courts are already starting to rule in favor of the women filing these lawsuits.

A woman from Modesto, California, is one of the plaintiffs recently awarded $68 million in both punitive and compensatory damages in this type of case. In her complaint, the woman specifically alleged that her use of Johnson & Johnson Baby Powder and Shower to Shower played a distinct role in developing this cancer.

The woman was first diagnosed in 2012 with ovarian cancer. Since that time, her cancer has metastasized and progressed to a Stage IV, often fatal cancer.

If you are now battling this cancer and clearly recall using one or more Johnson & Johnson talc powders or products, you should contact your California ovarian cancer attorney immediately.

Suppose you’re currently suffering from ovarian cancer. In that case, our law firm stands ready to review your case and then file a lawsuit so we can recover from your medical expenses, loss of earnings, pain and suffering, and other losses. Please call me at 916.921.6400 for free, friendly advice anytime.

See our past verdicts and settlements and client reviews on Avvo, Yelp, Google.

Editor’s Note: This page has been updated for accuracy and relevancy [cha 10.1.21]