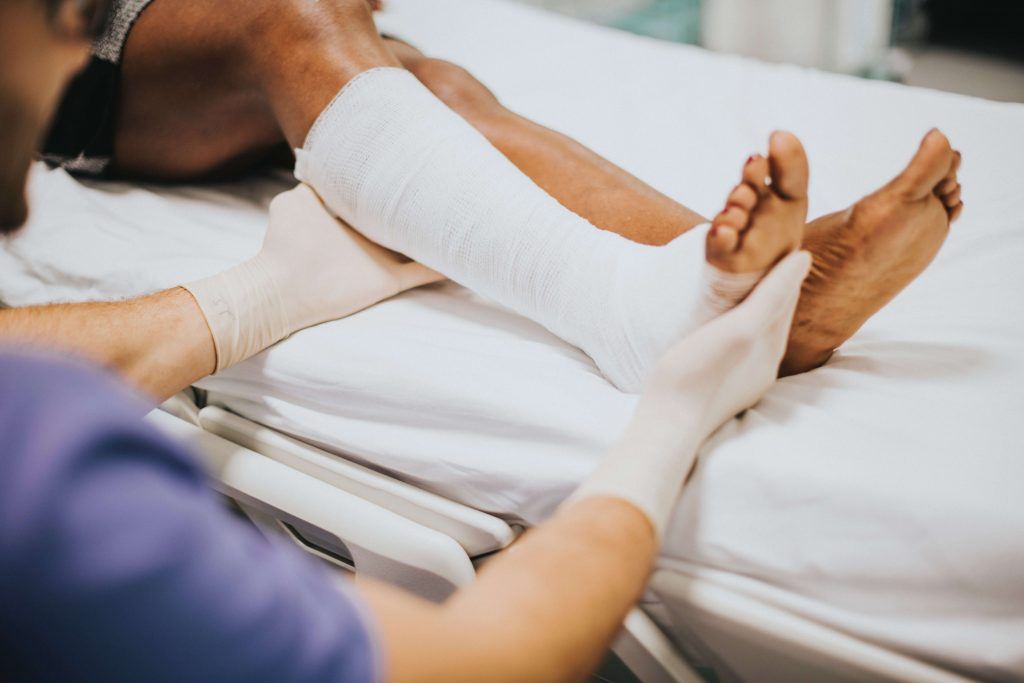 Impaction fractures of the tibia are particularly high energy fractures seen in motor vehicle accidents. A tibia fracture can greatly impact your life. If you or a loved one has suffered a broken leg bone in an accident due to another person's negligence, you have the right to pursue a claim for compensation. Call our traumatic injury lawyers for free, friendly advice at (916) 921-6400. Our experienced attorneys have been representing injured victims since 1982. We'll fight to get you the full compensation you deserve for your injuries.

Anatomy of the Tibia

The tibia is one of the main weight-bearing bones on the body. It is also called the shinbone and is the bigger bone of the two long bones of the lower leg. Its upper joint connects the tibia to the femur in the knee. The lower joint connects the lower tibia to the talus at the ankle joint. The tibia is closely connected to the fibula by the interosseous membrane, which forms a joint called the syndesmosis just proximal to the ankle.

The tibia is believed to be the strongest weight-bearing bone of the body. It is the second biggest bone besides the femur. As a long bone, it has two epiphyses and one diaphysis. The diaphysis is the shaft of the bones and the epiphyses are the two ends.

The upper epiphysis is near the knee and the lower epiphysis is near the ankle. The most proximal part of the knee is associated with the medial and lateral condyle. The upper surfaces of each condyle connect to the femur, which forms the weight-bearing part of the knee joint. The space between the flattened condyles is where the cruciate ligaments and menisci lie. Together the condyles form the tibial plateau.

The shaft of the tibia forms a triangular shape along its borders: an anterior, medial and lateral border. The lower part of the tibia is smaller than the upper part and forms five different surfaces and the process known as the medial malleolus. It forms the ankle joint along with the fibula and connects to the talus.

It can hold up to 4.7 times the bodyweight, which tells you the kinds of forces necessary to fracture this bone.

Fractures of the Tibia

Tibial fractures are separated into three different categories, not including open fractures, which require special treatment and which can occur anywhere in the tibia. The three categories of fractures include the following:

These can occur after a fracture from a height, automobile accidents, sports incidents, and other recreational activities. It can be treated by casting from the foot to above the knee. Some patients can have intramedullary rods placed in the center of the bone on both ends of the fracture. It is done in the operating room and requires about an hour of operating time. The rods are held in place with screws placed above and below the rod.

Plates and screws are not as commonly used as rods but can be used in those shaft fractures held close to the ankle. An external fixator may also be used, especially in severe fractures. The external fixator is used when there are open fractures and significant soft tissue damage.

Recovery from a tibial plateau fracture may take up to several months. This period of time involves non-weight bearing and the use of crutches or a walker.

The tibial plafond fracture occurs at the bottom of the tibia and involves the joint in the ankle. The fracture occurs close to the joint surface and secondary arthritis is possible. Often the cartilaginous surface of the ankle is involved. Soft tissue swelling is one of the big problems with this fracture, which interferes with doing surgery. Surgery might have to be delayed so that swelling can decrease and surgery can be done.

Immobilization can be done with casting or with an external fixator until the soft tissue goes down and then definitive treatment can be performed. Definitive surgery involves casting, if there is minimal displacement, external fixation with screws, or limited internal fixation using small incisions to place screws in the fracture fragments. Internal fixation allows for the best alignment of the pieces of the fracture. Ankle fusion is used for very severe fractures that have no hope of getting back a functional ankle.

Tibial impaction fractures tend to form at the proximal or distal end of the tibia. These involve a force placed on the foot that extends through the ankle joint and onto the area of the distal tibia and fibula. The distal end (or the proximal end) of the tibia is crushed and foreshortened, with multiple small fragments. This type of fracture heals well with only the problem of a foreshortened bone, which does not heal with the same length it once had.

With impacted fractures of the tibia, the fibula is not always fractured. These tend to be high impact fractures, such as motor vehicle accidents in which the foot and ankle are driven into the leg compartment or into the back of the front seat in the back seat.

The symptoms of tibial fractures depend on where the fracture is located and on the type of injury. The most common symptoms include:

When you experience these symptoms, it is important to seek medical attention as soon as possible, giving the attending physician information about how the fracture occurred along with your medical history.

Diagnosis of a Tibial Fracture

X-rays, such as plain films, can tell the nature and degree of the areas fractured in the lower leg. It can tell if the fracture is angulated, displaced and possibly if it is impacted. Joint involvement can be seen on x-ray as well. If there is difficulty seeing things on plain film x-ray, a CT scan or MRI scan of the leg can pick up on subtle fractures, particularly of the joint spaces. The MRI exam has the added benefit of being able to pick up on soft tissue injuries in the lower leg.

Treatment of a Tibial Fracture

A long leg cast is applied with the knee flexed 0-5 degrees. It may need to be done in an emergency room with sedation or in the operating room under general anesthesia, depending on the patient and type of fracture.

In stable fractures, weight-bearing can be begun at about 1-2 weeks. A below-knee cast can be used after 3-5 weeks, and a functional brace can begin when partial healing of the tibia has taken place.

In the case of a tibial non-union, weight-bearing can begin at about 6 weeks after the injury. It is started after 3-4 months once a delayed union has been suspected.

In surgical cases, such as displaced, comminuted and some impaction cases, the fracture is healed with screws or with plates and screws, along with bone grafting in cases where the bone has a long way to go before it connects with the bone it is supposed to connect to.

Surgery is recommended in the following cases:

The most current form of treatment of tibial fractures involves the use of the intramedullary nail. A rod is inserted from the front of the knee down into the bone marrow space of the tibia. The rod crosses into the fractured space. Nails come in different sizes in order to fit tibias of different sizes. The rod is screwed into the tibia using two screws. This procedure cannot be used in children or adolescence because it crosses over the epiphyseal plate.

Plates and screws can be used wherever the intramedullary rod cannot be used. The plates are usually affixed to the outside of the bone.

External fixation involves placing metal pins into the bone so that the bones are in proper alignment. They are attached to a bar outside of the skin that acts like a stabilizing frame that holds the bones where they need to be until they heal.

The following video demonstrates the treatment of a fibula fracture associated with a tibial fracture.

Tibial injuries can involve problems with the shaft of the tibia or problems, such as arthritis, of the knee or the ankle. Some complications include:

I'm Ed Smith, a Sacramento Traumatic Injury Lawyer. If you or a loved one has suffered a leg fracture as a result of someone else's negligence and would like to discuss your legal options with an experienced Sacramento Personal Injury Attorney, call us at 916.921.6400 or 800.404.5400 for free, friendly advice.

Editor’s Note: This page has been updated for accuracy and relevancy [cha 10.29.20]