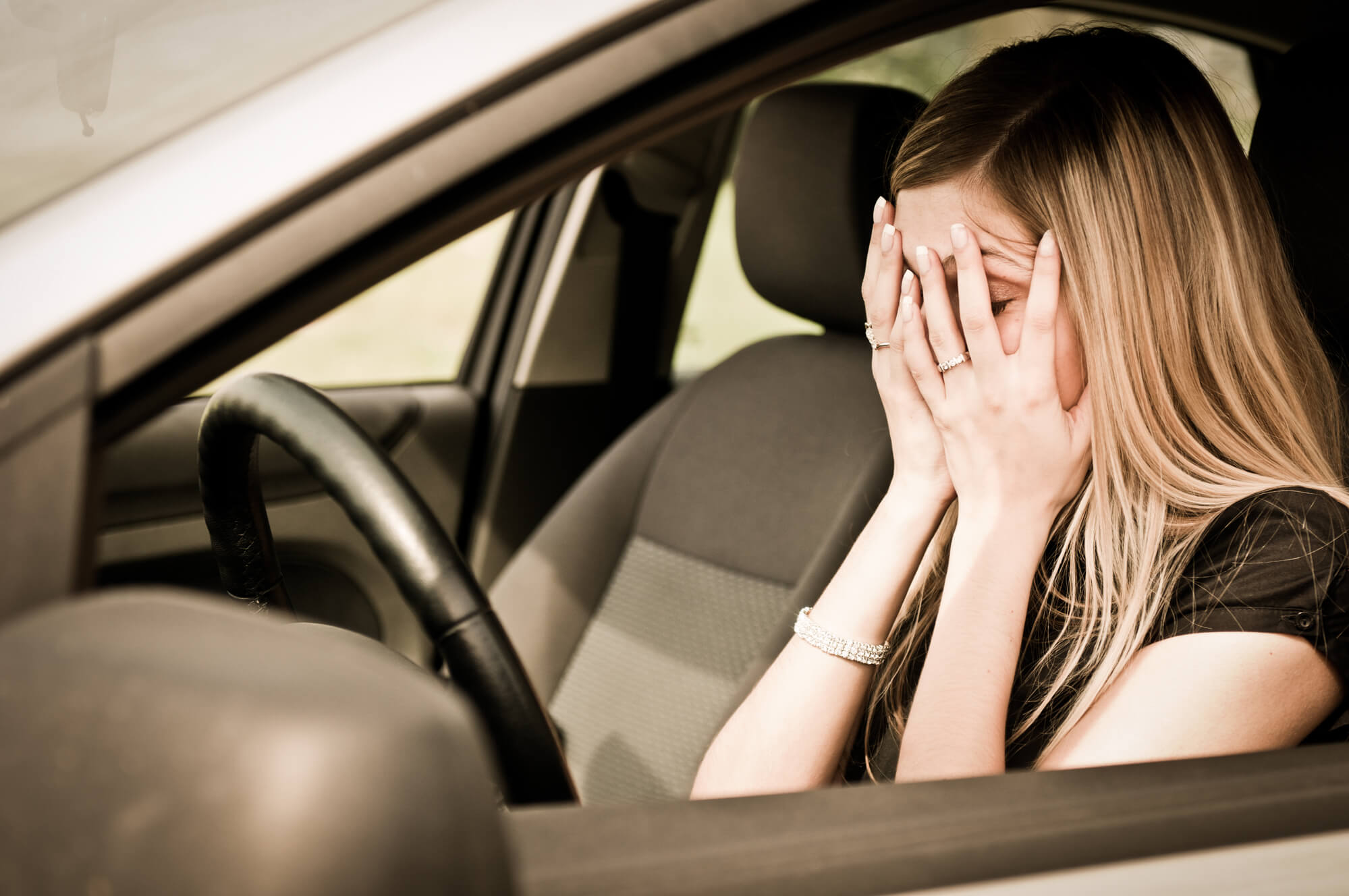 Across the United States, a hit and run accident occurs on average about every minute according to the AAA Foundation for Traffic Safety. Alarmingly, 65% of the fatal hit-and-run accidents involved pedestrians and bicyclists. As such, it is more important than ever to be safety-conscious while traveling in our communities.
In an effort to raise awareness of the rate of hit-and-run accidents in our community, we compiled data to chart out exactly when and where these accidents are taking place.
First let's take a look at what a "Hit and Run" is.
What is a Hit-and-Run?

After an auto accident, drivers in Sacramento and everywhere in California are required to remain at the scene of the crash. Unfortunately, this doesn't always happen. Failure to remain at the scene is commonly referred to as a "hit and run." Hit-and-runs are illegal and often result in misdemeanor or felony charges for drivers who flee the scene.

Sacramento Hit-and-Run Auto Accident Study Data
The charts and graphs below plot out the locations, times, and injury rates of all of the hit and run accidents in the City of Sacramento in 2017 and 2018. This is the most recent, complete data set available as of March 2020. Data was compiled using CHP's I-SWITRS records system.
The Top 10 Most Common Roads for Hit-and-Runs
This chart shows which roads Hit-and-Runs are occurring on. 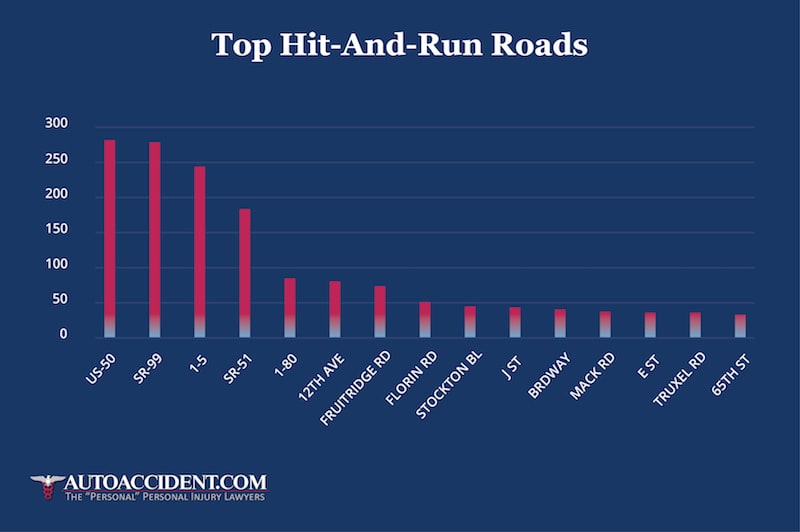 The most highly trafficked roadways are some of the prime locations for hit-and-run accidents. According to this data, the roads with the highest rate of hit-and-run incidents include:
The top 10 roads where hit-and-runs occur:
Most Dangerous Hit-and-Run Intersections
This chart shows the areas where Hit-and-Runs occurred. Accidents occurred at or near these intersections: 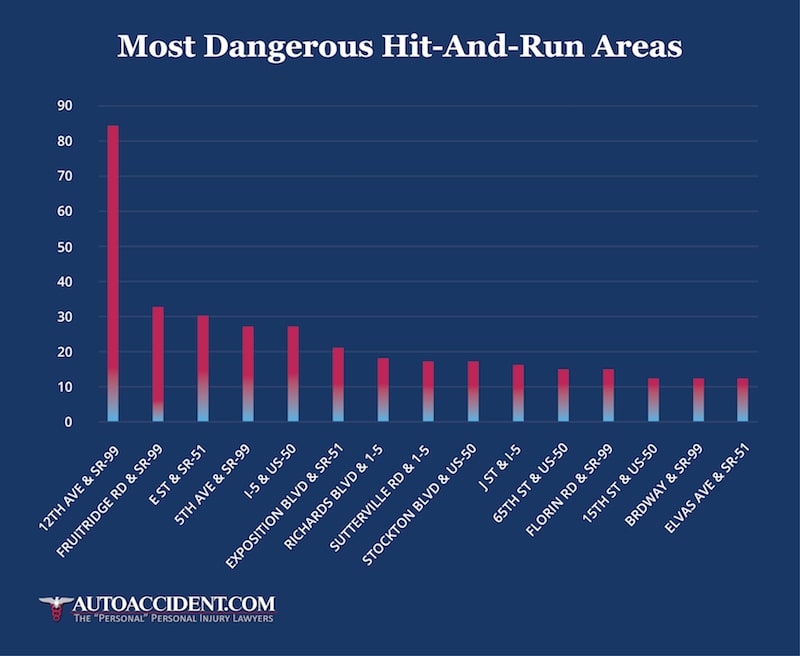 SR-99 undoubtedly is one of the most major roadways running through southern Sacramento. While one might expect a higher than average accident rate along this road, the number of hit-and-run incidents is alarming. In fact, the area around SR-99 and 12th Ave saw 84 hit-and-run accidents during this two-year period. This is more than double the hit-and-run accident rate for anywhere else in the city.
What Time of Day do Hit-and-Runs Occur?
This chart shows when Hit-and-Runs are reported in the City of Sacramento. 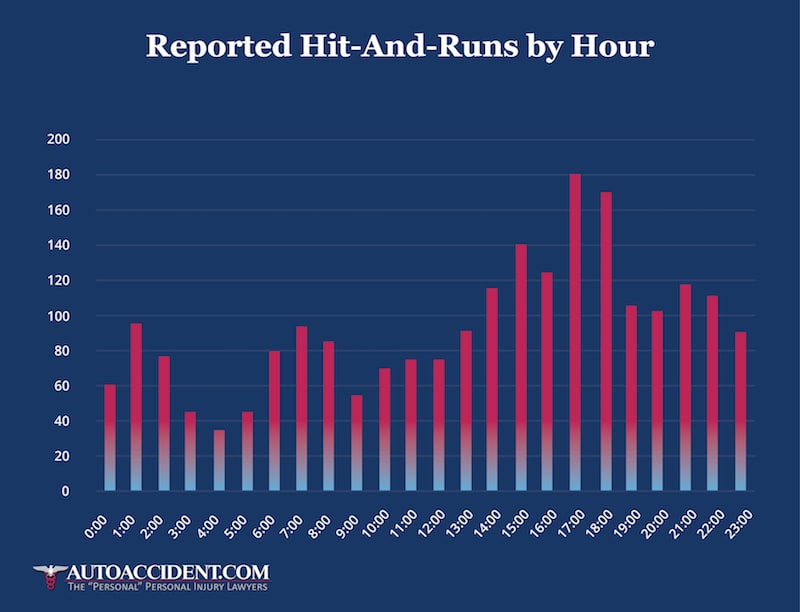 Most collisions occur in the afternoon hours, and hit-and-runs are no different. Hit-and-runs are most reported between 2pm and 6pm and peak at 5pm - 6pm. This coincides with rush hour traffic.
36% of Hit-and-Runs Involve Injuries
This chart shows non-injury, injury, and fatality statistics. 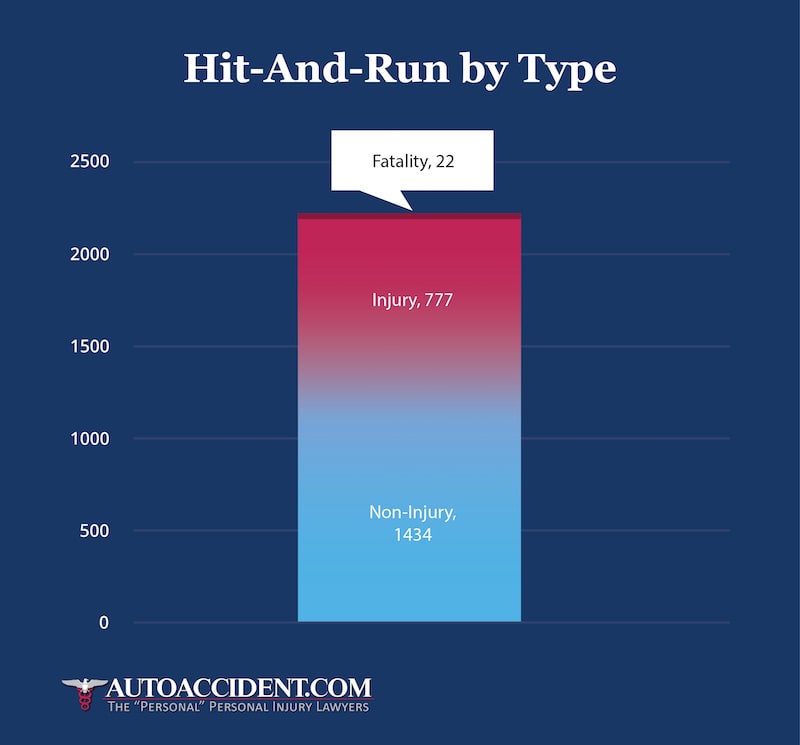 It is hard to imagine adding more insult to injury at an accident scene than a driver leaving an injured victim behind. However, this is the case in 36% of the hit-and-runs reported in the City of Sacramento between 2017-2018. During this time period, a total of 2,233 hit-and-run accidents occurred. This tragically included 777 injuries and 22 fatalities.
Interactive Heat Map:
This map's purpose is to show you at-a-glance the arterial roads where Hit-and-Runs are occurring.
To accomplish this, the points are spread out near the closest intersection where accidents occur. The points on the map are indeed a great representation of Hit-and-Run hot spots but are not meant to be accurate down to the exact location of each crash.
Where Should You Stop After an Accident?

While most people understand that you are legally required to remain at the scene of an accident, many people do not know whether to move their car to the side of the road or to leave it in the location in which the accident occurred. The law in California is as follows:

This is to say that if the accident resulted in an injury or death to an individual, the motorist must immediately stop the vehicle and have the vehicles remain in place.

If the accident did not result in injury, the drivers are to relocate their cars to the nearest, safest location.

What to Do After a Hit-and-Run Accident

Step 1: Call 911.
The first order of business is to get the professionals on the scene to provide emergency assistance to anyone involved. The police must make an official report with proper documentation. The sooner they collect their report, the sooner a case can be opened for them to start tracking down the other driver.

You will want to provide the police with as much information as you possibly can so that the details of the incident aren’t lost or skewed over time. These details should include the color, size, and make/model (if possible) of the other car and any distinguishing features that you might have noticed about the other car or driver. Also, report the circumstances of the accident.

If possible, ask witnesses and bystanders to provide additional information to create a fully-documented perspective for the authorities.

In addition to the police responders, medical responders might also arrive at the scene to assist with first aid or emergency services.

In the event someone hit your vehicle while it was parked and there is minor property damage, you can fill out an SR 1 form with the California DMV.

Step 2: If You’re Injured, Seek Treatment.
If you are injured as a result of the accident, seeking treatment should be a top priority. Whether you have a broken bone, sore muscles, or just a nagging persistent headache, you should go see a doctor straight away. Not only can delayed treatment worsen your injuries, but it can complicate your personal injury claim. If you delay your treatment, it could look suspicious when an insurance adjuster or judge is reviewing your case.

Step 3: Speak to a Lawyer.
After an accident, speak to an attorney who has experience with Hit-and-Run accidents as soon as possible. On our Sacramento Hit-and-Run Lawyer page, we explain some of the remedies available to victims of Hit-and-Run collisions. We've tracked down Hit-and-Run drivers, helped people obtain compensation from their own insurer, and always explore all recovery options available.

Editor’s Note: This page has been updated for accuracy and relevancy [cha 7.14.20]