Why is this important?
Home
Resources
Breaking Through Government Immunity
Government Entity Claims for Road Defects
Hazards Created by Potholes 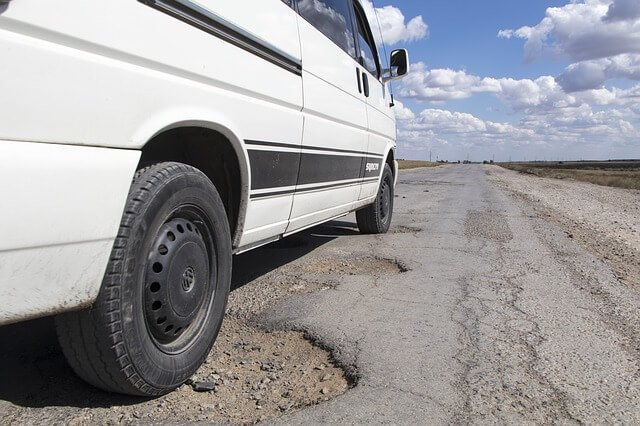 Potholes are an unfortunately common feature of Sacramento roadways. These holes in the ground can grow quite large and be dangerous to highway travelers. Some are particularly deep and can cause a vehicle to lose control. They also present a danger when motorists make evasive movements to avoid them. Motorcyclists have to be especially aware of the potential hazards created by potholes, which could easily cause a tragic accident.

Potholes, especially those found on highways and freeways, are a significant hazard. Driving from Sacramento up Highway 50 to Tahoe, one can see the damage that inclement weather and heavy vehicles can cause to the road surface. Potholes may form due to heat and pressure generated by semi-trucks and cars with snow chains. They can grow to become quite deep and wide. Obviously, the larger the pothole, the higher the potential that they cause an accident, but even small holes in the roadway can cause harm.

The presence of potholes on our roads is an obvious problem for commuters. Politicians recognize this, and some local candidates have even chosen to base their entire platform around the issue. California freeways are getting more and more crowded each year, and maintenance costs are high. Sometimes pothole repair gets put on the back burner.

The greater the number of potholes, the higher the likelihood that they will cause accidents, some of which could be severe. Potholes can cause damage to the vehicle, which in turn may result in the driver losing control of the car. Another dangerous scenario potentially exists when a driver swerves to avoid a large pothole, entering into the path of another vehicle. Keeping the roads in good repair is one way to start reducing the number of motor vehicle accidents that cause injuries or fatalities each year in California.

In theory, the State of California, and specifically the California Department of Transportation (CalTrans), is responsible for vehicle damage that was caused by a pothole. The Caltrans website contains information on submitting a claim for up to $10,000 at form LD-0274, Claim Against Department of Transportation for Amounts $10,000 or Less (PDF). Applicants are instructed to fill out the form, sign the original, and mail it along with evidence in support of the damage and facts of the incident to the CalTrans claims office.

One may ask, "Does CalTrans ever pay?" According to research done by The Mercury News, in 2015, 4106 claims were made to Caltrans, and they paid about 10% of those claims. So the answer is not often, but sometimes.

Clearly, the hazard from potholes is most significant with motorcyclists. Hitting a pothole on a motorcycle can cause the bike to go down, or the rider to be thrown off, resulting in significant injuries or death. But potholes also create injury risks to occupants of four-wheeled vehicles, and can even cause harm to pedestrians if the hole occurs in a crosswalk or sidewalk area.

Some common scenarios in which potholes can cause injuries:

Who is Responsible for Injuries Caused by Potholes?

In the second example above, where a driver hits a large pothole, and it is the sole and proximate cause of the accident, and resulting injuries, the State of California would arguably be responsible for the driver's damages since the State has a duty to maintain its highways and freeways.

These claims are hard to prosecute, however. First, there is a much shorter period of time in which the State of California must receive notice of the claim. This shortened time limit often results in claimants missing the window in which they must notify the public entity, which destroys the case entirely. There are different procedures to follow when attempting to sue a public entity. If the specific procedures are not followed to the letter, the claim can be damaged or dismissed.

If, after the procedural loopholes are navigated correctly, and the case goes forward, the State will defend the claim vigorously, often including motions to dismiss and other court filings seeking to dispose of the case altogether. Then, if the claim survives the State's defense motions and is ultimately successful for the injured party, there may be a smaller recovery than anticipated or deserved.

Because of the difficulty involved in litigating such cases, often attorneys will only consider taking a pothole case if the facts surrounding causation are crystal clear and the injuries are severe.

The following video provides some tips on how to avoid potholes on the roadways.

We are proud members of the Million Dollar Advocates and the National Association of Distinguished Counsel.

Review the following links to read more about our practice on Avvo, Yelp, Google, and Settlements and Verdicts