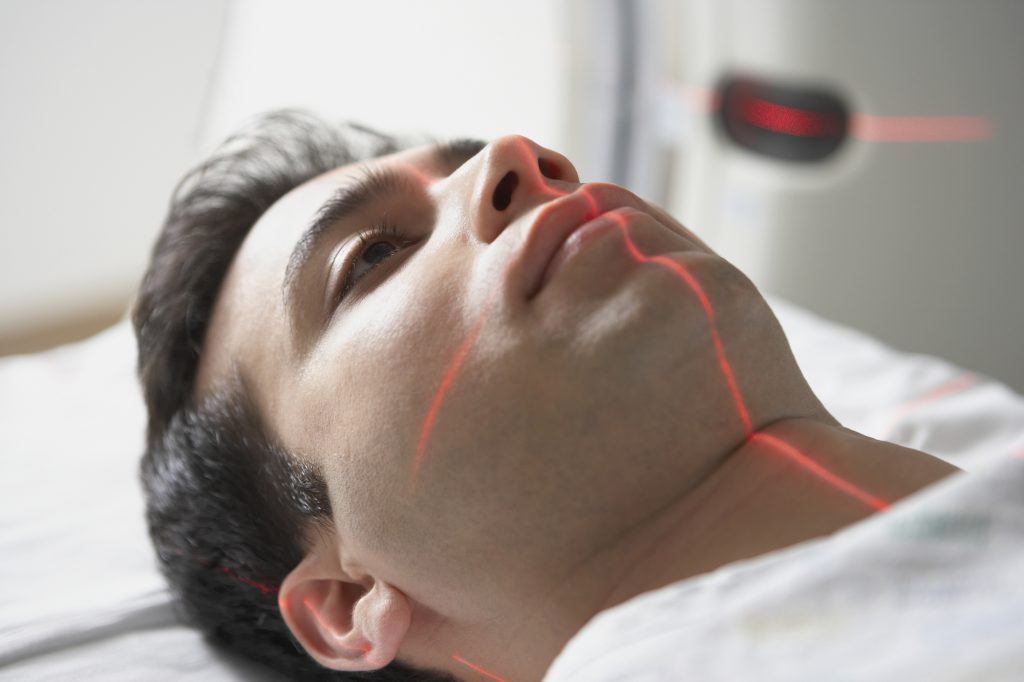 A functional MRI is also referred to as a fMRI. It is a non-invasive medical test that can aid in the diagnosis and treatment of many health conditions.
The MRI part of the exam utilizes radiofrequency pulse, a computer and a powerful magnetic field that creates detailed pictures of parts of the body. It does not make use of x-rays.   The images can be copied to a CD, seen on a computer screen or seen on plain film.
It creates 2-dimensional cross-sectional images. The test called fMRI is a newer procedure that looks at minute metabolic changes that take place in active parts of the brain using MRI technology.
The fMRI is a diagnostic test that helps understand how normal, diseased, or injured brains are working and can help surgeons know what risks lie ahead for surgical or other invasive procedures to the brain.
During the test, you will likely wear a gown that has no metal fasteners.
Most of the time, you can drink or eat normally prior to the test. In a fMRI, you will receive a contrast dye that can help the technologist light up certain areas of the brain.
In an MRI, the most commonly used contrast material is gadolinium. It has a low allergic potential. The amount given has to do with whether or not you have severe kidney disease.
You may need to be premedicated if you have a history of claustrophobia. Your doctor may use a mild sedative to calm you during the test.
You should not have a fMRI if you have a cochlear implant, a clip or metal chip near the eye, a clip used for a brain aneurysm, metal coils in blood vessels or a history of having an implantable defibrillator or a pacemaker.
Certain metallic things are okay as long as they have been in the body for a period of time, such as a drug infusion port, an artificial heart valve, an implanted nerve stimulator or an artificial joint. Metal pins, screws, surgical staples or plates are generally okay if they have been in the body for a period of time.
A functional MRI detects changes in the oxygenation of blood and the flow of blood in the brain. An active area of the brain absorbs more oxygen.
The test can map the brain according to its areas of activation. It doesn’t require any radiation and is an accurate test of brain function.
The molecule that carries oxygen is diamagnetic when it contains oxygen but is paramagnetic when not oxygenated.
The MRI scan can pick up on the subtle differences between the two and can tell which areas are oxygenated and which areas have used up oxygen.
Contact Us
Search
Personal Injury
Client Reviews
★★★★★
"Me and my wife; had a car accident. We were amazed how easy, professional, friendly attorney Ed Smith is along with his staff. Everybody is amazing. Thank you so much, we are very impressed!" Alex & Dinah M.
★★★★★
"Ed Smith and his office team took on a difficult personal injury case on my behalf and for the passenger in my car. Ed is a top- notch attorney. His staff couldn't have been more helpful and kind. No need to look elsewhere. I give Ed Smith my highest recommendation." Beverly
★★★★★
"Ed and Robert have been taking great care of my husband and I for the past 5+ years. They are always there when you have a problem and a quick resolution! Even when the issues have nothing to do with them. They are willing to help ease the pain off your shoulders. They are as good as it gets! Thank you again for everything." Annie T.
★★★★★
"Very professional. Great team, staff and service all around. Mr Smith was very honest, straight forward with his advice. He gives the word "attorney" an honest reputation. I will seek his council anytime, and would recommend him at the drop of a dime." Jeremy M.
★★★★★
"I would highly recommend Ed Smith to any friends or family in need of a personal injury attorney. Ed, and his staff, are very caring on top of being very experienced in this field. The staff always keeps you informed of the status of your case and they are always easy to reach by phone." Shannon D.
★★★★★
"Edward Smith law offices provide competent, thorough, and personable help for victims of personal injury. When you first meet the staff you know you contacted the right office. This law office treats clients like people. I recommend this office to anyone seeking representation regarding personal injury." David M.
View More
Submit a Law Firm Client Review