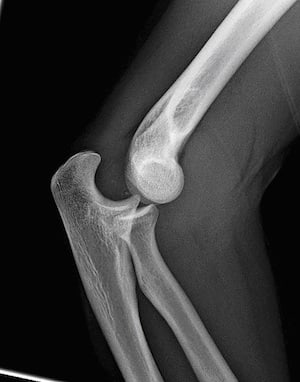 The elbow is called a hinge joint, meaning it can extend from zero to 180 degrees, or slightly further, before extending back again. This bending requires contact between the two surfaces of the joint. If this contact has been disrupted, this is called a dislocation. It can range between partial, also called a subluxation, and complete.

How is this Dislocation caused?

Most elbow dislocations are traumatic injuries. The most common mechanism of an elbow dislocation is a fall on an outstretched hand. When someone falls on an outstretched hand, the force is transmitted from the hand up through the arm and into the elbow, possibly removing the articulation between the joint surfaces. This can also occur in a car accident when someone extends their arms to brace themselves against an impending impact.

There are numerous options for treatment. A partial dislocation may only require a simple reduction in the emergency room. This is the case with a pediatric injury called nursemaid’s elbow. In this injury, someone has quickly grabbed and twisted the child’s arm, subluxing the radial head. It could lead to pathologic fractures. A complete dislocation can damage nearby bones, arteries, and nerves. This could require surgery to put back together.

An Elbow Dislocation has Complications

There are numerous complications that can result from a severe elbow dislocation. One of the issues is that an elbow dislocation predisposes the joint pocket to an infection called osteomyelitis. In addition, the dislocation can also damage arteries and nerves in the area, leading to peripheral nerve injury requiring rehabilitation.

Other Structures are in Play

If a serious elbow dislocation occurs, there could be significant damage to arteries, nerves and other bones in the area. Damage to multiple locations at once is called polytrauma. Some of the most commonly injures bones include radius and ulna shaft fractures. These are the two bones that make up the wrist and are commonly injured when the elbow dislocates.

There are several injuries that must be considered:

Prognosis of an Elbow Dislocation

The prognosis of an elbow dislocation is entirely dependent on the severity. A simple dislocation has a relatively good prognosis. The person is only at an increased risk of repeating the same injury. A complete dislocation can damage other structures in the area, leading to a more guarded prognosis.

Surgery May be Required

I’m Ed Smith, a Sacramento Bone Fracture Attorney. Even dislocations can lead to serious disabilities. If you’ve been injured in an accident, please call me at 916.921.6400 for friendly, free advice.

I have been inducted into the California Million Dollar Advocates Forum. This group represents some of the premier trial lawyers in the country, having won million and multi-million dollar verdicts in prior cases.

See my prior verdicts and settlements.

Please read some of the reviews left by my past clients on Avvo, Yelp, and Google.