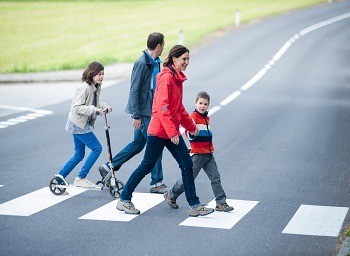 Pedestrian vs. auto accidents occurs with unfortunate frequency in El Dorado Hills and in California in general. According to the Los Angeles Times, California ranked highest in the country for the number of pedestrian fatalities. According to findings from the Governors Highway Safety Association, approximately 700 pedestrians passed away in motor vehicle incidents in California in the year 2014.

Nationally, the data is not much better. According to the Centers for Disease Control and Prevention (CDC), over 5,000 pedestrians died in traffic collisions in 2015, and over 100,000 victims were treated at hospitals for injuries. If that was not bad enough, pedestrians were over 50 percent more likely to be killed in a collision than in an accident involving two vehicles.

In a pedestrian collision, extensive injuries can occur even where the offending vehicle was moving at a low speed. The simple reality is that as resilient as the human body can be, it cannot withstand the full force of impact from a vehicle weighing more than five thousand pounds.

In many instances, the cause of a collision between a driver and a pedestrian is some form of negligent action, or inaction, by the driver. Sidewalk and crosswalk accidents can happen easily if, for example, a driver is texting or not watching the road. Even taking a relaxing early-morning jog or walking in a designated crosswalk can expose you to harm by a reckless driver. Common causes of car versus pedestrian accidents include:

In some instances, the driver mistakenly believes that a pedestrian needs to yield to them. This is not accurate at all. In fact, according to California Vehicle Code § 21950, a driver of a vehicle is legally obligated to yield the right-of-way to someone who is attempting to cross a roadway within a designated crosswalk. Drivers also have a duty to exercise due care and reduce their speed or take other necessary precautions to ensure they do not collide with the pedestrian. Basically, this means if you or a loved one was hit by a car while you were crossing at a designated crosswalk, the driver could probably be held liable for your harm and losses.

The following video discusses how drivers and pedestrians can work together to make the roads safer.

As mentioned, in roughly half the accidents where a car hits a pedestrian, the pedestrian dies. That does not mean the other half walks away unscathed. In fact, many pedestrians suffer serious, debilitating injuries such as fractured bones, a traumatic brain injury or related head trauma, paralysis, nerve damage, and loss of limbs. The treatment for these injuries can be quite expensive since you will likely require months of rehabilitative care, surgeries, medication, and so forth.

In some cases, liability is contested, and the irresponsible driver points the finger back at you, claiming you were also negligent. If you find yourself in this situation, do not worry. California adheres to a comparative negligence standard for personal injury cases. Basically, comparative negligence is a legal standard for assessing situations where there is evidence that both the plaintiff and defendant were partially at fault for the accident.

California adheres to a “pure” comparative negligence standard. That means you can still obtain a financial recovery, even if a jury determines you were primarily at fault for the accident. For example, if a jury determines that you were 90 percent at fault and the driver was 10 percent at fault, you can still obtain a financial recovery of 10 percent of your economic and non-economic damages. This is a fairer standard than other jurisdictions requiring a plaintiff to be no more than 50 percent at fault to receive a financial recovery in a personal injury lawsuit.Time is of the EssenceThe sooner you contact an experienced El Dorado Hills pedestrian accident lawyer, the sooner a team of lawyers and investigators can get to work building your case. It is also important to speak to an attorney right away because, in California, an accident victim only has two years from the date of the accident to file a personal injury lawsuit in court. If you wait to file after two years, your case will likely be thrown out of court.El Dorado Hills Pedestrian Accident LawyerA pedestrian accident can cause permanent injuries or even death. If you or a member of your family has suffered injuries in a pedestrian accident, please give our experienced injury attorneys a call at 916.921.6400 or 800.404.5400 for free, friendly advice.

Editor's Note: This page has been updated for accuracy and relevancy [cha 6.4.21]
:sb [cs 1027]
Photo by ab
Contact Us
Search
Personal Injury
Client Reviews
★★★★★
"Me and my wife; had a car accident. We were amazed how easy, professional, friendly attorney Ed Smith is along with his staff. Everybody is amazing. Thank you so much, we are very impressed!" Alex & Dinah M.
★★★★★
"Ed Smith and his office team took on a difficult personal injury case on my behalf and for the passenger in my car. Ed is a top- notch attorney. His staff couldn't have been more helpful and kind. No need to look elsewhere. I give Ed Smith my highest recommendation." Beverly
★★★★★
"Ed and Robert have been taking great care of my husband and I for the past 5+ years. They are always there when you have a problem and a quick resolution! Even when the issues have nothing to do with them. They are willing to help ease the pain off your shoulders. They are as good as it gets! Thank you again for everything." Annie T.
★★★★★
"Very professional. Great team, staff and service all around. Mr Smith was very honest, straight forward with his advice. He gives the word "attorney" an honest reputation. I will seek his council anytime, and would recommend him at the drop of a dime." Jeremy M.
★★★★★
"I would highly recommend Ed Smith to any friends or family in need of a personal injury attorney. Ed, and his staff, are very caring on top of being very experienced in this field. The staff always keeps you informed of the status of your case and they are always easy to reach by phone." Shannon D.
★★★★★
"Edward Smith law offices provide competent, thorough, and personable help for victims of personal injury. When you first meet the staff you know you contacted the right office. This law office treats clients like people. I recommend this office to anyone seeking representation regarding personal injury." David M.
View More
Submit a Law Firm Client Review