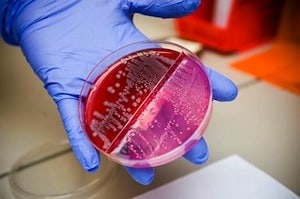 I’m Ed Smith, a Sacramento E. Coli Food Poisoning Attorney. Escherichia coli, also known as E. coli, is a bacterium that normally lives in the intestinal tract of animals and humans. In fact, most E. coli bacteria are usually harmless and can play an important role in a healthy human gut. However, some E. coli bacteria, oftentimes contracted through contaminated food or water, can cause serious illnesses. The most common type of E. coli bacteria that cause disease are those that make a toxin known as Shiga toxin. When you hear about E. coli outbreaks in the media, it is usually the Shiga toxin-producing E. coli that are causing the infections.

Typically, Shiga toxin-producing E. coli bacteria live in the intestines of animals like cattle, sheep, goats, deer, and elk; however, cattle are the major source of the bacteria that cause human illnesses. You can become infected with E. coli bacteria when you ingest a tiny amount of human or animal feces, which can be found in and on food products more often than you’d like to think. The CDC estimates that about 265,000 Shiga toxin-producing E. coli infections occur every year in the U. S. Recent outbreaks of E. coli have been linked to contaminated flour, alfalfa sprouts, Costco rotisserie chicken salad, and even contaminated food from Chipotle. While most people think that E. coli infections are caused by contaminated food, it is also important to note that you can pick up the bacteria almost anywhere, whether you happened to swallow contaminated lake water while swimming, or you did not wash your hands well after using the bathroom.

How Do I Know I Have An E. Coli Infection?

While symptoms of an E. coli infection can vary from person to person, the most common symptoms include diarrhea, which is sometimes bloody, bad stomach cramps, and vomiting. Fever can also occur, but it typically is not really high. Symptoms usually occur three to four days after exposure, but can sometimes appear as late as ten days after exposure. In most cases, people will start to feel better within five to seven days.

Some E. coli infections can be mild, but in other cases, the infection can be severe and even life-threatening. A very serious complication of an E. coli infection is an illness called hemolytic uremic syndrome, or HUS. Symptoms of HUS can include decreased urination, fatigue, and losing the color in your cheeks. In the event you develop HUS, it is usually necessary to be hospitalized because your kidneys can shut down and you may develop other more serious problems. While most people who develop HUS can recover within a few weeks, others may suffer permanent damage, and in extreme cases, HUS may be fatal.

If you have diarrhea that has lasted for more than three days, and it is accompanied by a high fever, bloody stools, and vomiting, it is possible that you have been infected by E. coli bacteria. Be sure to contact your healthcare provider as they will be able to confirm through clinical and laboratory testing whether you have an E. coli infection. If E. coli is found to be present, the lab tests will have not only helped with determining proper medical treatment for your illness, but it will also significantly help public health officials determine whether your illness is part of a larger outbreak. After you have sought medical treatment, try to remember what and where you ate prior to becoming ill as this information can be essential for determining the source of your illness whether it is a supermarket, restaurant, food manufacturer, or other food company.

I’m Ed Smith, a Sacramento E. Coli Food Poisoning Lawyer. If you or a family member has become seriously ill or passed away as a result of food poisoning, please give me a call at 916.921.6400 for free, friendly advice.

Read a multitude of my customer reviews by following these links: Yelp, Avvo, and Google.

I belong to the Million Dollar Advocates. Trial lawyers in this forum have garnered numerous case verdicts and settlements in the multi-million dollar range.

Read some of my Past Settlements and Verdicts here.