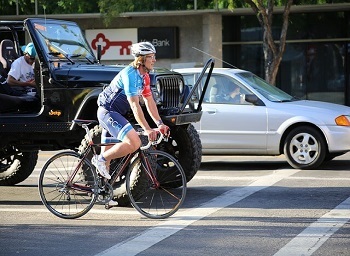 Sacramento features many fantastic bike trails surrounded by beautiful scenery. Sacramento also tries to accommodate bicyclists on public roads whenever feasible with established bike lanes. Unfortunately, a bicyclist is at serious risk of getting hit by a motorist in and around the East Sacramento area, even with bike lanes.

An example of the risks associated with riding a bicycle in Sacramento is illustrated by the tragic accident on Elder Creek Road near Power Inn Road at a FedEx in Sacramento. A bicyclist was traveling along the north edge of the road when a car traveling in the same direction hit the bicyclist. The Sacramento Police Department reported that the vehicle driver fled the scene and left the bicyclist for dead. The bicyclist’s body was not found for hours.

As you can see, when a bicyclist is hit by a car, the consequences can be life-threatening. Even if a bicyclist survives a collision, the injuries they suffer can be debilitating and have long-term effects on the injured individual. Common injuries include:

Bicycles Deserve the Same Respect as a Motor Vehicle

According to California Vehicle Code Section 21200, bicyclists generally have the same legal rights and responsibilities as motor vehicle drivers. Unfortunately, many motorists do not realize or accept this fact and act aggressively and recklessly when encountering a bicyclist on a public road.

According to the National Highway Traffic Safety Administration, the bicyclist is not at fault in most collisions involving a bicycle and a motorist. In most accidents, it is the motorist that is to blame.

How Many Bicycle Accidents Happen in East Sacramento

Collisions between motorists and bicyclists can occur in a variety of circumstances, but some of the most common scenarios include:

After a serious collision with a motor vehicle, you or a family member will likely recuperate from a significant bodily injury. You should not have the additional headache of dealing with an auto insurance adjuster. It is important to understand that the insurance company is not your friend. They do not care about your well-being. They are focused on paying out as little as possible on a personal injury claim. This is why hiring an East Sacramento bicycle accident lawyer will benefit you in the long run. You get to focus on your recovery while your attorney can handle negotiating with the insurance company. A bicycle accident attorney will file a claim seeking reimbursement of the financial and emotional damages you suffered from the accident, including:

An attorney can also assess the available insurance coverage to give you an idea of what could be reasonably recovered through an injury claim. For example, if you are the victim of a hit-and-run accident and the at-fault driver is never found, you would need to file a claim under your own auto insurance policy through your uninsured motorist coverage.

If you or someone you love has been injured in a bicycle accident involving a negligent driver, please call our experienced East Sacramento bicycle accident lawyers today at 916.921.6400 for free and friendly advice. You can also reach us online at AutoAccident.com.

Editor’s Note: This page has been updated for accuracy and relevancy [cha 7.13.21]