Why is this important?
Home
Personal Injury
Formal Discovery in Accident Cases
Dog Attack Discovery | Requests for Production of Documents 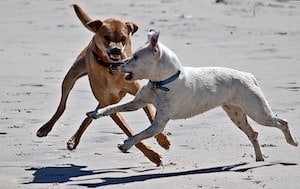 Discovery is a phase of litigation that will take place in nearly all personal injury lawsuits, including those cases based upon dog bites, dog attacks, and other animal attacks. The discovery process involves several formal processes by which the plaintiffs and defendants request and produce evidence in the case in the form of written questions (interrogatories) and answers, oral testimony (depositions), and documentary materials, among others. The specific modes of discovery and what evidence is being sought will be different from one personal injury lawsuit to another, primarily based upon what needs to be proven in each case. Dog attack discovery will usually focus upon the injuries and damages sustained by the plaintiff (as is the case in all personal injury lawsuits), as well as upon details of how the dog attack incident occurred, what prior behavioral problems the dog may have had, ownership of the animal, etc. Using requests for production of documents is especially helpful for discovering this type of evidence. The evidence is then used to prove legal liability on the part of defendants upon causes of action such as:

Requests for Production of Documents

State laws will establish the rules for "discovery" in civil lawsuits, including methods such as form and special interrogatories (written questions and answers), requiring testimony by oral deposition, the acquisition of records from outside parties by way of subpoenas (such as to acquire medical records and bills for an injury victim), and the identification and exchange of expert witness information.

One discovery tool that is used in most civil litigation cases -- but whose specific requests vary significantly depending upon the type of case -- is the request for production of documents. These are requests directed from plaintiff to defendant or from defendant to plaintiff, as opposed to document requests to third parties which are allowed by subpoena. In dog attack discovery, requests for production of documents sent from the defendant to the plaintiff will typically seek things like copies of the injured party's medical records and billings, wage loss information, photographs of the injuries, and other evidence that helps to establish the plaintiff's damages. These types of requests for documents that help to "prove up" the plaintiff's injuries, monetary damages, and non-monetary (general) damages are common to all personal injury lawsuits.

In dog attack discovery sent from a plaintiff to a defendant, requests for production of documents will usually focus on documents and records that are likely to help prove the defendant's liability. This will typically include documents such as:

In those cases where expert witnesses have been retained, additional discovery and requests for production will be sent seeking:

All of these different categories of documents will help the experienced personal injury attorney prove liability, prove their client's damages, and thoroughly prepare for a possible trial in the matter.

Watch this video describing how one dog bite survivor turned her incident around into a dog bite injury prevention campaign:

Hi, my name is Ed Smith, and I am a Sacramento Dog Bite Attorney. The evidence that needs to be collected to establish liability in dog bites and other animal attack lawsuits is unique to those types of cases. An experienced personal injury attorney will know how to use dog bite discovery tools like requests for production of documents to collect and assemble that evidence. If you or a member of your family has been injured in a dog attack, please give us a call at (916) 921-6400 or (800) 404-5400 for free, friendly advice. You can also reach us through our online contact form.

I am proud to belong to the Million Dollar Advocates Forum and the National Association of Distinguished Counsel.

Read about some of our past case results on our past verdicts and settlements page, and see our client reviews at Yelp, Google, and Avvo.

Photo by Ulrike Mai from Pixabay