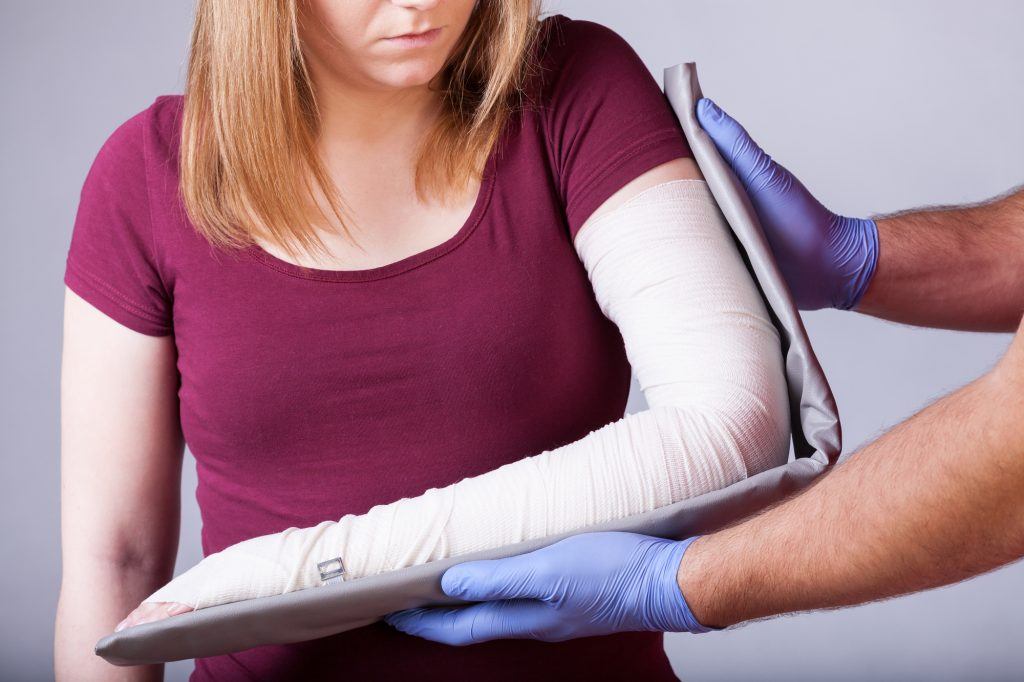 A distal humerus fracture is a break in the upper arm. These are relatively rare fractures, involving only 2 percent of all fractures.  They usually occur among boys in their teens and in females older than age 80.  The most common injury in the elderly involves falling from a standing height.  Most fractures involve the intercondylar area, which is the part of the bone between the two condyles that make up the elbow joint. The humerus can also break nearer to the shoulder joint, these kinds of breaks are referred to as proximal humerus fractures and is a common injury to the shoulder.

In older people, the fracture can happen with a minimal fall. In younger individuals, these broken bones are more commonly associated with high-velocity collisions such as found in motor vehicle accidents and sporting injuries.

If you or a family member has sustained a distal humerus fracture from an accident that was caused by someone else, you may be able to file a personal injury claim for compensation. Call us at (916) 921-6400 for free, friendly advice.

There is often a lot of swelling associated with these fractures.  It can be hard to identify the landmarks around the elbow. There will be a lot of crepitus in these injuries but it is not a good idea to push much on the fracture site to find crepitus because it involves pushing on nerves and blood vessels that can be damaged during the assessment process.  The fracture must be re-evaluated on a regular basis for compartment syndrome from excessive swelling and for neurovascular compromise.

X-rays in two views (front and side) will be able to tell if the bone is fractured in most cases.  Sometimes an oblique view is necessary.  Nondisplaced fractures may just show swelling of the fat pad in the elbow joint, often called the “sail sign” because of its triangular shape. CT scan can be used if it is not clear exactly where the fracture fragments are located.

There are many types of distal humerus fractures, including:

Treatment of a Humerus Fracture

The idea behind the treatment of distal humerus fractures is to put the joint surfaces in as close approximation as possible and to stabilize the articular surface.  The alignment of the joint must be in its proper position and there must be early range-of-motion exercises to keep the joint from becoming stiff. Such exercises will occur during physical therapy.

Treatment can be non-operative or operative, depending on the conditions.  If they are treated non-operatively, this can mean ongoing arthritis and limited function of the elbow after the bones have healed.  This is more commonly done in the elderly who already have poor expectations of normal function of the elbow, regardless of the type of treatment.  Often the fractures are comminuted so that it is difficult to put the bony fragments back into position.  A long arm splint is used at 90 degrees flexion for about 1-2 weeks after which range of motion exercises can be done with the elbow in a brace for about 6 weeks.

Plates are used at 90 degrees or 180 degrees from one another and the plates are held on with screws.  In some cases, a total elbow replacement needs to be done but this is not often attempted in the elderly population.  Range-of-motion exercises can be used to keep the joint from freezing up.  These are usually attempted after the pain and swelling have diminished—about 1-2 weeks after the injury.

Complications of a Distal Humerus Fracture

Post-traumatic arthritis can happen whenever the joint itself is involved.  This can be minimized by surgically aligning the fracture fragments so that the joint heals.  It can also be improved by doing early range-of-motion exercises to keep the joints from stiffening.  Joint spurs can form in certain types of fractures, which limit the range of motion of the elbow.

Photo by Deposit PhotosEditor’s Note: This page has been updated for accuracy and relevancy [cha 4.3.20]
Contact Us
Search
Practice Areas
Client Reviews
★★★★★
"Me and my wife; had a car accident. We were amazed how easy, professional, friendly attorney Ed Smith is along with his staff. Everybody is amazing. Thank you so much, we are very impressed!" Alex & Dinah M.
★★★★★
"Ed Smith and his office team took on a difficult personal injury case on my behalf and for the passenger in my car. Ed is a top- notch attorney. His staff couldn't have been more helpful and kind. No need to look elsewhere. I give Ed Smith my highest recommendation." Beverly
★★★★★
"Ed and Robert have been taking great care of my husband and I for the past 5+ years. They are always there when you have a problem and a quick resolution! Even when the issues have nothing to do with them. They are willing to help ease the pain off your shoulders. They are as good as it gets! Thank you again for everything." Annie T.
★★★★★
"Very professional. Great team, staff and service all around. Mr Smith was very honest, straight forward with his advice. He gives the word "attorney" an honest reputation. I will seek his council anytime, and would recommend him at the drop of a dime." Jeremy M.
★★★★★
"I would highly recommend Ed Smith to any friends or family in need of a personal injury attorney. Ed, and his staff, are very caring on top of being very experienced in this field. The staff always keeps you informed of the status of your case and they are always easy to reach by phone." Shannon D.
★★★★★
"Edward Smith law offices provide competent, thorough, and personable help for victims of personal injury. When you first meet the staff you know you contacted the right office. This law office treats clients like people. I recommend this office to anyone seeking representation regarding personal injury." David M.
View More
Submit a Law Firm Client Review