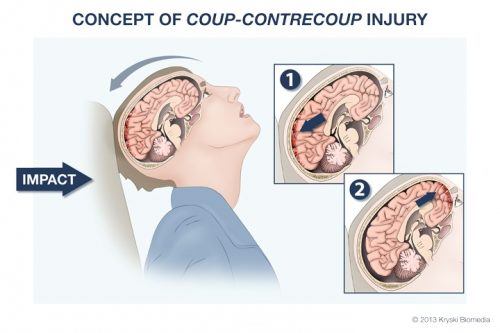 Occasionally in a head injury, you get what’s called a coup contrecoup injury to the brain. A coup contrecoup injury describes an injury that occurs both at the site of the injury and directly opposite where the injury occurred.  This happens when the force of the trauma is so great that the brain moves to the opposite side of the initial injury, causing the additional bleeding and bruising.

Blunt force trauma to the brain can cause life-long complications and extensive medical tre atments.If you or a loved one has sustained severe head trauma in an accident caused by a negligent other, you may be able to pursue monetary compensation to cover your damages. Reach out to our experienced brain injury lawyers at (916) 921-6400 for free, friendly advice. Our legal team can help you through the process of filing a personal injury claim for full compensation for a coup contrecoup injury.

How Does a Coup Contrecoup Injury Occur?

The coup part of the injury occurs at the site where the impact occurs.  There can be bruising of the brain or bleeding external to the brain. In the next instant, the brain sloshes to the opposite side of the skull, hitting the skull and bruising the brain in that area as well.  This is called a contrecoup injury. These are focal injuries in the brain that occur when a moving head strikes a solid and stationary injury.  The contrecoup injury can be more severe than the coup injury. They are considered double focal injuries rather than a diffuse injury.

The true mechanism of injury for contrecoup injuries is debatable.  It is known that the exact mechanism of injury involves abrupt deceleration of the head associated with striking the head against the skull.  Upon striking the head, the brain bounces off to the other side.  Movement of the cerebrospinal fluid may play a role in how the brain is thus injured.
Features of a Coup Contrecoup InjuryThe contrecoup injury, which is often seen in shaken baby syndrome or motor vehicle accidents, can lead to diffuse axonal injury.  Rarely, the contrecoup injury can result in a severe epidural hematoma.
We see contrecoup injuries in the lower frontal lobe area and in the frontal aspect of the temporal lobes.  Contrecoup injuries can be seen in areas besides the brain, including the eye lens, the skull, other bones in the body, and the lung.  In fact, many contrecoup injuries are seen in pulmonary contusions.
One type of injury involves the traumatic dislocation of the lens.  The force to the back of the head is so strong that the lens becomes the contrecoup injury and dislocates spontaneously.  In a pulmonary contusion, the worst of the injury is at the opposite side of the blow to the chest.
Contrecoup HistoryThe contrecoup injury was first described in the 1600s by Jean Louis Petit.  There were several meetings in the 1700s to discuss the issue of contrecoup injuries.  Papers were traded among physicians on the subject.
In 1768, the group chose a paper by Louis Sebastian Saucerotte, who won a prize for his paper on contrecoup injuries in people and on experimental animals.  His treatment?  It was bloodletting and applying herbs to the affected head. Today the medical profession has made progress without the use of leeches and herbs.
The video below explains more about coup contrecoup injuries.
Contact a Sacramento Traumatic Brain Injury Lawyer Today

If you or a loved one suffered a coup contrecoup injury in a catastrophic accident caused by the negligence of someone else, schedule a free consultation with one of our Sacramento traumatic brain injury lawyers at (916) 921-6400 or (800) 404-5400. Our attorneys are available anytime to review your contrecoup brain injury case and provide free, friendly advice.

Editor’s Note: This page has been updated for accuracy and relevancy [cha 2.25.21]