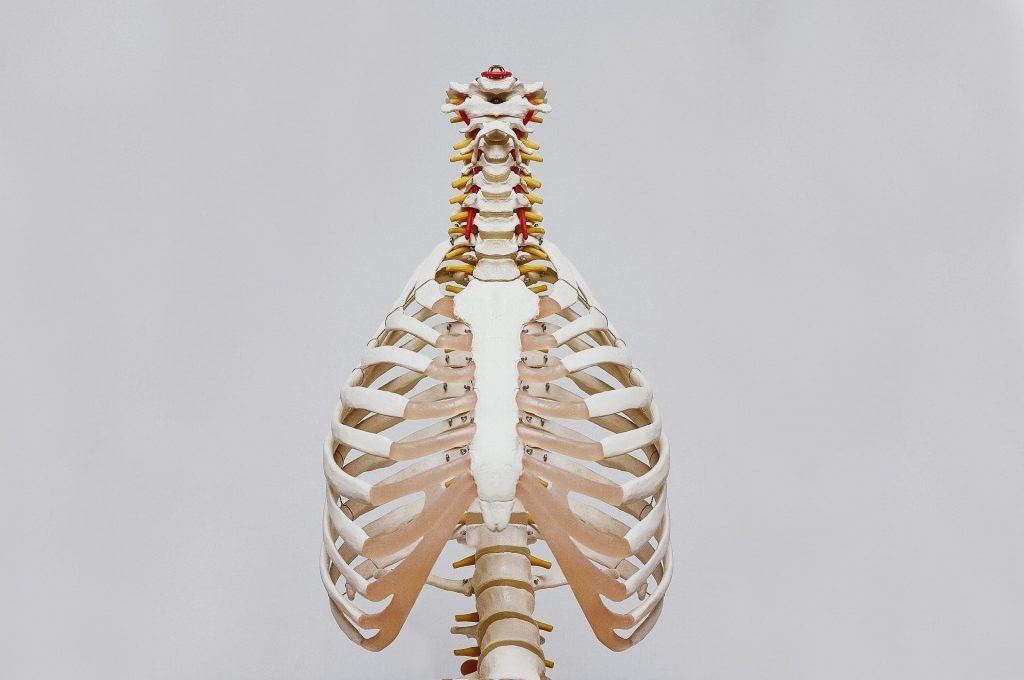 Cervical disc injuries can be debilitating and cause hardships on the injured and those closest to them. If you have suffered an injury in an accident due to someone else's negligence, give our injury lawyers a call today for free and friendly advice as you may be entitled to compensation for your pain, suffering, lost wages, and medical treatment. We can be reached at 916.921.6400.

Because the cervical spine is relatively unprotected, it is subject to injury from many different sources, including falls, sports injuries, motor vehicle injuries, motorcycle injuries, and diving injuries. The bones may become fractured or the disc can herniate or become disrupted, putting pressure on the spinal cord or spinal nerves.

What is a Cervical Disc Injury?

A blow to the side of the head or a forced flexion/extension injury can happen in any of the situations as described above. Certainly, a fracture or other bony injury can occur; however, many patients suffer no bony injury but instead develop damage to the cushion between the vertebrae—the discs. Common names for a disc injury include:

A herniated disc happens when the connective tissue that binds the disc to the confines of the space between the vertebrae ruptures, spilling out some gelatinous material that then pushes and irritates either the spinal cord or a specific cervical spinal nerve. This causes both neck pain and pain that travels along the spinal nerve affected by the disc. 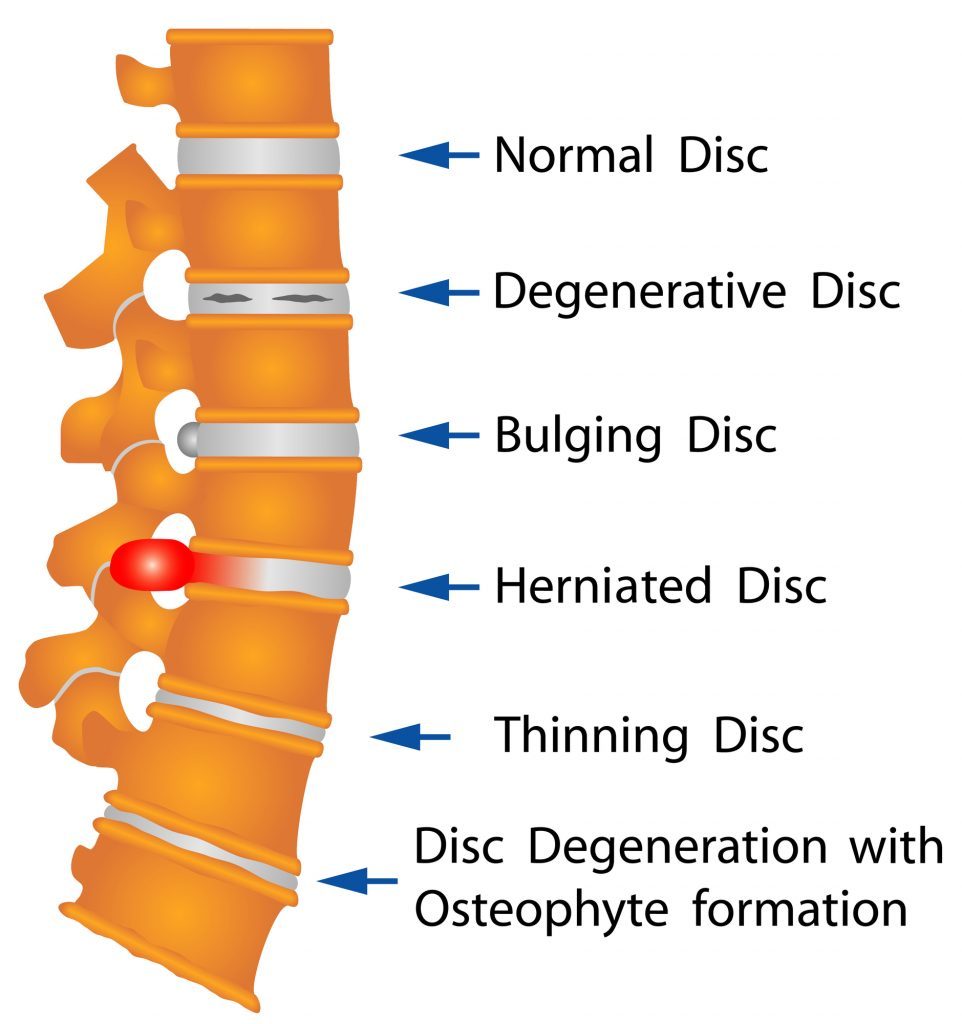 There are two types of pain you find in a herniated cervical disc:

What are the Symptoms of a Cervical Disc Injury?

As mentioned, the symptoms could be directly related to the disc itself and are located in the area of the vertebrae. Symptoms can also be related to pressure or “pinching” of a cervical spinal nerve. Some of the symptoms of a damaged or herniated cervical disc include:

What are the causes of a Cervical Disc Injury?

Because the neck is not well protected, it doesn’t take a huge injury to cause a herniated disc. In fact, many cases of cervical disc herniation happen as a result of a slow, wear and tear phenomenon known as a degenerated disc. Those who are older are more prone to getting a disc herniation because discs tend to dry out as we age and they are more prone to rupturing or tearing with even a minor injury.

Certainly, motor vehicle accidents and motorcycle accidents can be the cause of cervical disc injury. These happen due to the blunt force traumatic forces that tear the protective capsule of the disc.

Other causes of a cervical disc injury include sports-related injuries such as diving injuries, falls from a great height, and altercations.

Age is certainly a factor in getting a herniated disc. Because of day to day wear and tear on the neck and because the disc tends to dry out over time, older people are more likely to have these fragile discs herniate with little provocation.

People who engage in high-risk behaviors such as driving too fast and reckless driving are at higher risk of getting a cervical spine injury, including a herniated disc. People who don’t wear seatbelts are also at higher risk.

People who play rough sports like hockey and football, or those who do high diving can do damage to their cervical discs as part of their sport. People at risk for falls can easily herniate a disc in the act of falling.

Diagnosing a cervical disc injury can be difficult as the bones that show up on an x-ray tend to look normal. Discs are a part of the soft tissue of the cervical spine and don’t show up on routine x-rays. The following are the main tests used to assess the degree of injury in a suspected herniated cervical disc:

Treatment of a Cervical Disc Injury

The treatment of a cervical disc injury can be conservative or invasive, depending on the wishes of the patient, the skill of the doctor, and the severity of the disease.

If conservative treatment is suggested, the patient must follow a prescribed exercise program to reduce pain and they must avoid putting the neck in painful positions.

They need to take anti-inflammatory medication to ease the pain as much as possible. Studies have shown that the herniated part of the disc will shrink over time.

Common pain medications used in a cervical disc injury include:

Physical therapy is used to loosen spasm in the cervical muscles and to reduce the pain of the herniated disc. You can go from having a painful neck to being able to exercise the neck, at least to some degree. In physical therapy, you’ll likely do these therapeutic things:

If conservative therapy is not working or if the doctor recommends more aggressive management, you will be referred to a neurosurgeon or spinal surgeon, who will decide if you will get better with surgery. Because surgery causes pain in and of itself, it sometimes leads you to trade one type of pain with another. You may be able to relieve the nerve root pain but will still have cervical pain. For this reason, invasive surgery is done on just a few patients with a herniated cervical disc. Invasive surgery is done under the following conditions:

In surgery, most surgeons simply remove only the portion of the disc that is actually protruding from the vertebral space. In some cases, the entire disc is damaged and must be removed. In such cases, the vertebrae need to be fused together using metallic hardware so that the spine is stable and the bones don’t rub together with bone on bone. Artificial discs do exist and your surgeon may consider putting one in.

Complications of a Disc Injury

Cervical disc injuries tend not to be temporary problems that can go away in a few days or weeks. Even with the best treatment, the complications of cervical disc herniation secondary to trauma include ongoing neck pain, which can interfere with sleep, movement of the neck, or even having the neck stationary, as with writing on a computer with your job. The cervical pain tends to be sharp and associated with spasm of the cervical muscles.

Another complication is opioid drug addiction. If your doctor treats your longstanding pain with opioids, you can become addicted to the drugs and use them even when your pain is not that bad. You can exaggerate your pain in order to get more pain medications. This can cause problems at home and at work.

The cervical nerve root can be chronically painful so that with every movement of the neck you get shooting pains down the arm that interfere with activities of daily living.

This pain can be very severe and can cause most of the complicating factors involved in having a cervical disc herniation.

In the video below, Dr. Gary Simonds with Carilion Clinic discusses herniated cervical discs, including causes, symptoms, and treatments.

I'm Ed Smith, an experienced Sacramento personal injury lawyer working with individuals in Northern California since 1982. If you or a family member has suffered an injury due to someone else's negligence, give me a call for free and friendly advice at 916.921.6400 or (800) 404-5400.

See our client reviews on AVVO, Google, and Yelp and our case history of verdicts and settlements.