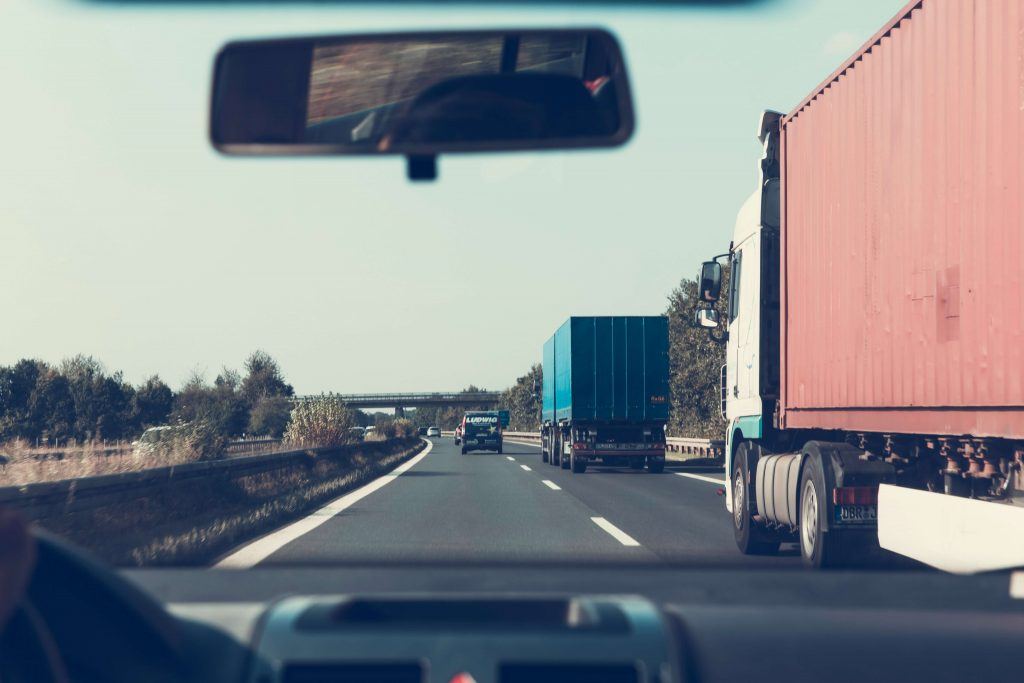 Thousands of Californians drive every day alongside or behind tractor-trailers and big rigs. These large commercial trucks have blind spots that increase the risk of accidents with car drivers and motorcyclists.
If the truck driver suddenly applies the brakes or switches lanes while being unaware of a smaller vehicle in the blind spot, it could cause a serious accident.A Truck’s Blind Spots are More Dangerous

A blind spot refers to the area around an automobile, which is not visible to the driver even while using side or rearview mirrors.

Commercial trucks have multiple large blind spots (also known as ‘no zones’) because of their huge size. Blind spots are present right in front of the truck, just behind and below the driver-side window, and right behind the trailer, among other positions. Due to the massive size of the truck, it is possible for a driver to completely miss another vehicle that could be behind the truck.

To address this risk, truck drivers receive specialized training to keep checking their side and rearview mirrors frequently while driving. This enables them to track smaller vehicles before they enter one of their blind spots. However, if the truck driver is careless, fatigued, or distracted, it is easy to make a misjudgment in a blind spot, which could have devastating consequences for the occupants of another much smaller vehicle.

Front of the Truck

The front of the truck has a blind spot that stretches anywhere between 15 and 25 feet from the front bumper. The truck hood is at a height above the road, which causes this blind spot. Cars and bikes should try to avoid this area in order to minimize the risk of a crash.

Rear of the Truck

The blind spot at the truck’s rear extends as much as 150 to 225 feet back from the rear bumper. Cars and other vehicles should steer clear of this zone because the truck will block their view, making it impossible to see the traffic ahead. In this situation, if the truck driver applies brakes suddenly, the car driver in the rear blind spot may receive very little time to react.

Left Side of the Truck

On the left side of the truck, the blind spot begins from the driver’s door and stretches up to the trailer’s midsection. Other vehicle drivers should avoid lingering on the truck’s left side because the truck driver might be unaware of their presence in the blind spot. It is best to pass the truck at a steady pace.

Right Side of the Truck

The blind spot on the right side of the truck starts from the front and goes back to the rear. The right-side blind spot is bigger than the one on the left side. Other vehicle drivers should never pass the truck on its right. At the intersections, it is particularly important to be more alert. If the truck makes a wide right turn while a car is trying to squeeze by, it would increase the risk of a collision because of the large blind spot on the truck’s right side.

The animated video below provides a detailed look at a truck's dangerous blind spots.

Truck Drivers are Responsible for Safety

When a truck hits a car while changing lanes, the defendant may try to claim that the car driver was partly at fault for being present in the truck’s blind spot. Similar arguments are often put forward in rear-end collisions between a truck and another vehicle. However, just because you were driving in the truck’s blind spot at the time your vehicle was hit or sideswiped, it does not necessarily mean that you have to bear a part of the blame.

The truck driver is trained to identify vehicles before they enter its blind spot, drive slowly while making a wide turn, maintain the speed limit, switch lanes safely, and exercise more caution if they see someone entering their blind spot.

A truck must not swerve in front of another vehicle for any reason, or apply brakes suddenly without reason as these actions could cause a rear-end collision. To minimize the risk of under-riding in a rear-end collision, a ‘Mansfield Bar’ should also be installed on the truck’s back.

When a smaller vehicle gets hit by a truck in its blind spot, the car driver and other occupants may sustain catastrophic injuries. The truck driver may be held liable for the victims’ injuries if the accident occurred due to his or her negligence. The key elements that are integral to proving negligence will include:

The trucking company could also be held directly liable for the victim’s injuries if the company was aware of the truck driver’s past track record of ignoring blind spots or otherwise driving dangerously, or hired the driver while knowing about the driver’s deficient operating skills. In these cases, the legal theories of negligent supervision or negligent hiring could apply.

I’m Ed Smith, a Sacramento truck accident attorney. You have a right to be compensated for your personal injuries occurring in a blind spot truck accident caused by the negligence of a truck driver. Call me today for free, friendly advice at 916.921.6400 or 800.404.5400.

Photo by VanveenJF on Unsplash