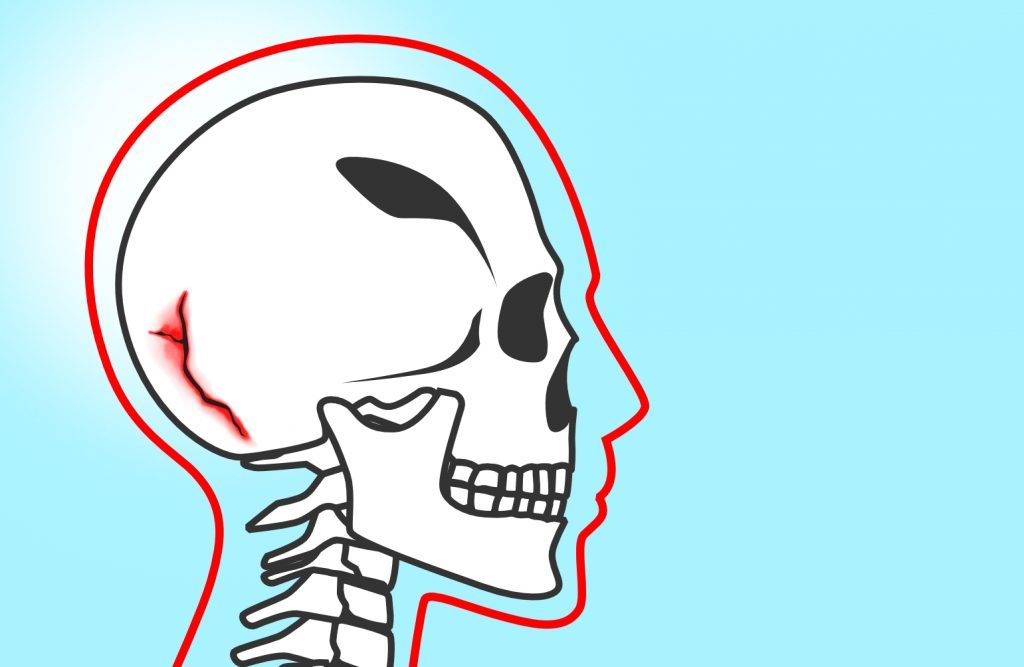 I’m Ed Smith, a Sacramento Personal Injury Lawyer. Those who have any experience dealing with motor vehicle accidents understand that these events can range markedly in both their scope and their severity. While there are many different injuries that could develop in a car crash, one of the most serious is called a basal skull fracture. A group of medical workers recently published the experience of one of their patients to serve as a lesson to everyone.

How does a Skull Fracture Happen?

The world of bone fractures is as large and varied as the mechanisms that cause them. When someone is involved in an auto accident, there are numerous external forces that act on the body that could lead to traumatic injuries. When someone crashes their car, their car comes to a sudden stop; however, the momentum of the body continues to move. That is why it is important for everyone to wear their seat belt every time they step into a car; however, the head is not strapped into the seat like the body is. As the car rotates, flips, and moves in unexpected directions, the person's head could smash into the door, windshield, or steering wheel. This could happen with a serious amount of force that might lead to a skull fracture.

What is a Basal Skull Fracture?

Just like other bones, there are many places where someone could fracture their skull. The top of the head is called the scalp and could be fractured in this location; however, an often overlooked location is the base of the skull. The base of the skull forms the floor of the skull cavity and is where the brain sits in the head. A basal skull fracture is risky because it has the potential to lead to a traumatic brain injury. This can occur if a piece of the skull breaks off and collides with either the brain tissue or one of the numerous blood vessels in the brain. A cerebral contusion or an intracerebral hemorrhage can result, leading to a host of complications and, possibly, a wrongful death. There are many different signs and symptoms that medical providers will look for to gauge whether or not someone has suffered a basal skull fracture and these were recently reviewed in a published case study.

Watch Youtube Video ~ Basilar Skull Fracture. The video below discusses the signs and symptoms of a basal skull fracture.

A young, male patient was involved in a serious auto accident when his vehicle rolled over multiple times after leaving the road. Emergency medical personnel responded quickly to the 911 call and assessed the patient at the scene. They deemed that he was in critical condition and were able to successfully intubate the patient to preserve the airway. Without this airway, the patient would have suffocated and died at the scene. Once intubated, they stabilized all of his vital signs and transported him quickly to the local hospital. They did note that he was wearing his seatbelt at the scene. He was evaluated at the hospital and had fluctuating consciousness; however, he was able to move all four of his limbs. On physical exam, the patient was noted to have blood seeping out of his right ear. On further exam, the patient's eardrum had been perforated and blood was coming from the ear canal. The blood was dripping onto the bed sheet in the emergency room and was leaving a halo pattern, termed the halo sign. This is one of the signs of a basal skull fracture, another being called the battle sign. The battle sign is bruising over the mastoid bone; however, this was not noted on the patient's physical exam. The patient was taken to the radiology suite where a CT confirmed a transverse basal skull fracture.

The halo and battle sign are two of the signs that people should look for if they suspect a basal skull fracture. If this fracture is suspected, the patient should be taken to radiology for a CT scan so that their injury can be confirmed. After this, the fracture needs to be repaired. If the fracture has been displaced, the patient may require complicated surgery to put this bone back together. If the fracture hasn't been displaced, the patient's symptoms must be watched closely to ensure that other complications don't require surgery. The prognosis of this injury depends heavily on the patient's neurological status and whether or not they have other associated injuries. The serious nature of this type of injury can place families under a great deal of stress. Speaking to an experienced Sacramento personal injury lawyer relieves some of this burden.

I belong to the California sector of the Million Dollar Advocates Forum. Membership is limited to injury lawyers with case verdicts that have exceeded $1 Million Dollars.

My past verdicts and settlements are available for inspection.

Please stop and look at some of the reviews given by my earlier customers on Avvo, Yelp, and Google.

Image Attribution: The x-ray image of the skull at the top was pictured first on Wikimedia Commons and has been printed here with permission of the GNU FDL as well as the 3.0, 2.5, and 2.0 versions of the CC BY SA.