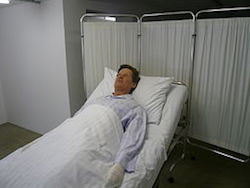 You may have heard stories about certain mishaps and oversights that occur during surgery. A doctor leaves a surgical instrument or a sponge inside a patient. A nurse improperly administers anesthesia. But what may surprise you is the risk associated with having a type of blanket placed over your body during the procedure.

3M Co. is the manufacturer of the Bair Hugger warming blanket. It has been commonly used in surgeries since 1987. Recently, 3M Co. has faced a series of lawsuits claiming that this warming blanket actually circulated contaminants causing serious, life-threatening deep-joint infections, according to the Star Tribune.

Purpose of the Bair Hugger Blanket

A warming blanket helps maintain your body temperature during surgery. Multiple studies show that keeping your body at a proper temperature has proven to accelerate recovery time and reduce the risk of significant bleeding. It's also important because most patients experience some level of hypothermia during a surgical procedure since their body may be unable to produce heat fast enough to compensate for the heat lost while under anesthesia. In 1988, Dr. Scott Augustine developed the Bair Hugger warming blanket as a solution to this problem.

The Bair Hugger warming blankets were approved by the Food and Drug Administration (FDA). Though, they were approved through the FDA’s 510(k) premarket clearance program. This program enables a product to go on the open market without providing any clinical proof of safety, if the product is substantially similar to other products that are already available, according to FDA.gov.

How the Bair Hugger Blanket Could Be Spreading Bacteria

A Bair Hugger warming blanket acts like a forced-air heater. It pushes warm air through a hose into your blanket and that air flows over your body. Though, it also releases air under the surgical table. The air released under the surgical table could cause bacteria to spread throughout the room and wind up on you. As a result, you could wind up getting an infection. Patients have reported suffering infections in their hip or knee, including Methicillin-resistant Staphylococcus aureus (MRSA).

When the inventor of a product comes out publicly to warn people that their product is dangerous, it may be wise to take heed of their caution and examine whether the product may pose a harm. As mentioned earlier, Dr. Scott Augustine is the inventor of the Bair Hugger blanket and he has come forward declaring that his product is a danger to patients receiving implant devices like artificial heart valves and joints, according to the New York Times. Dr. Augustine states that the forced air can spread bacteria causing serious infection. Dr. Augustine has spoken out against the device at professional medical meetings and has assisted with medical studies showing that the warming blanket may pose a threat of spreading deadly bacteria. He is expected to be a key witness and testify when Bair Hugger lawsuits go before a jury.

Since Dr. Augustine came forward to warn people about the infection risks associated with his warming blanket, he has been roundly criticized and dismissed by the defense lawyers representing 3M Co. They've gone so far as to describe Dr. Augustine's claims as "baseless." However, the science appears to be on the side of Dr. Augustine. Researchers are examining the risk of side effects from the medical warming blanket. Three separate studies appear to support the conclusion that these warming blankets do indeed pose a risk of serious infection for patients.

So we have the inventor of the Bair Hugger warming blanket stating it poses a risk of causing serious infection. We have a study done in 2011 and two studies done in 2013 validating those concerns. Yet the 3M Co. defense lawyers want you to believe that there's nothing to see here.

How Taking Legal Action Can Help You

If you or a loved one suffered a serious infection in your knee or hip after undergoing a surgical procedure, you may be able to pursue financial restitution against the Bair Hugger blanket manufacturer. You could pursue monetary damages for:

You do not have an infinite amount of time to pursue legal action against a potentially negligent product manufacturer. In fact, under California Civ. Proc. §335.1, you have two years from the date of the injury to file a personal injury lawsuit. This is known as the statutes of Limitations. It is a period of time, established by the California legislature, in which an injured party can seek financial restitution against a potentially negligent party. If you attempt to file a lawsuit after the statute of limitations has expired, you may actually be barred from court.

An important exception to be aware of is if a minor child was harmed. In this situation, the two-year statute of limitations is "tolled" (i.e. stopped) until the child reaches their 18th birthday. Once they turn 18, they have two years to file a personal injury lawsuit.

In either case, you should take action sooner rather than later.

Over eight hundred lawsuits have been filed in connection to Bair Hugger warming blanket infection claims. The volume of lawsuits resulted in a judge ordering the claims to be managed through multidistrict litigation.  You may be wondering, "what is multidistrict litigation?" Great question. It sounds similar to a "class action" lawsuit, which is more common parlance in our society. A class action involves a group of people who were similarly injured by the same parties under similar facts.

Multidistrict litigation is different in that there is not a single lawsuit that will resolve all of the cases. Instead, the lawsuits are consolidated and managed by one federal judge who handles the bulk of discovery matters. Discovery matters include responding to interrogatories, producing relevant documents, taking depositions, filing motions, and so forth. There may even be a de bene esse deposition (also known as a trial deposition), where witnesses can provide their testimony via videotape, which will then be played at any trial involving the Bair Hugger warming blanket. This video testimony has the same value as if the witness were testifying in front of a jury.

Multidistrict litigation (also known as MDL) helps improve efficiency in the court system and helps get the case resolved sooner rather than later.  In large MDLs, like the Bair Hugger MDL is shaping up to be, there may be millions of records sought and produced by both sides. The MDL process affords a more cost-effective and time-efficient mechanism to produce relevant information in the litigation. Once discovery is completed, the federal judge overseeing the MDL will typically select a group of "bellwether cases" for trial. These trials are needed to help assess the viability of the cases contained within the MDL and can help quantify the potential liability on the defendant. Take, for example, the MDL involving DePuy hip replacement devices. After a number of bellwether trials resulted in substantial verdicts in favor of injured patients, Johnson & Johnson, which owns DePuy, reached a global settlement in the MDL valued at approximately $2.5 billion, according to jnj.com. Those funds would be dispersed to roughly 8,000 patients who had claims in the MDL.

Will the Bair Hugger MDL result in a similar global settlement? I cannot say definitively and cannot guarantee an outcome to your case. But you can only know for sure if you speak to an experienced Sacramento personal injury attorney.

The evidence of patients developing life-threatening infections due to Bair Hugger warming blankets is disturbing. People go to the hospital and agree to surgeries in an effort to heal, not to get sick and potentially die due to a preventable infection.

I’m Ed Smith, a Sacramento personal injury attorney. If you or a loved one has been injured or passed away, please call me at 916.921.6400 for free, friendly advice.

Client Reviews are available at: Yelp, Google, and Avvo (an organization that rates lawyers).

Past Verdicts and Settlements.