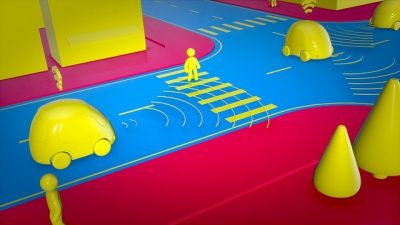 Automobiles are being manufactured with a variety of levels of automated operation, from minimal tools that help warn or guide a human driver in operating the vehicle -- often referred to as "driver assistance" features -- to the fully self-driving "autonomous vehicles" designed not to need human management of most or all driving tasks.

Regardless of the level of automation, what all these vehicles have in common is various types of sensors that collect data about road and environmental conditions and software that processes that data and decides whether or not to warn a human driver about something it senses or -- for more autonomous vehicles -- to make critical braking and steering decisions.

Although the promise of improvements in safety and efficiency from increasing levels of vehicle automation is very high, the practical implementation of these features is still limited by the ability and willingness of automobile manufacturers to carefully design, test, build, monitor, and improve their products.  When an automaker is unwilling to do this, features that directly involve vehicle safety like automated driving sensors and software can, unfortunately, lead to injuries and deaths.   Those injuries and deaths are frequently followed by recalls and lawsuits.

Categories of Sensor and Software Problems

These features are often referred to by different names, but the National Highway Traffic Safety Administration -- the primary roadway safety regulatory agency in the United States -- collectively refers to them as "driver assistance technologies."  NHTSA notes that more than 36,000 people died in roadway crashes in the U.S. in 2019. Because many deaths resulted from human error, these driving assistance technologies may help decrease these fatality numbers over time.

NHTSA categorizes these technologies as:

Within each of these categories, sensor and software problems can themselves produce dangerous conditions if the devices either fail to detect and respond to dangers as they should or overreact to conditions that do not actually present a current danger to the vehicle occupants.

A major recall was recommended by NHTSA in January 2021 of more than 150,000 Tesla automobiles, including Model S vehicles from 2012 to 2018 and Model X vehicles from 2016 to 2018.  This was due to a software issue with the vehicles' touchscreen display and control panels that could cause drivers to lose the feed from their rear-mounted camera systems and lose the ability to engage or disengage other driving assistance systems.  Although Tesla attempted several times to remedy the situation with automatic, remote software updates, NHTSA recommended a recall for the persistent problems.

The sensor and software components referred to as the Tesla "Autopilot" system have also been implicated in several crashes, a few of which have proven deadly.  In these instances, the nature of the problem remains unclear as to whether the crashes resulted from the vehicle sensors and software or from driver over-reliance on the Autopilot features.  Tesla has been criticized for mixed messaging -- although the vehicle manuals state that the system is not fully autonomous and that drivers need to remain aware of roadway conditions and be prepared to take over manual operation of the vehicle, the company's naming the system "Autopilot" and suggestions that it may be "self-driving" may be causing drivers to over-rely on the system.

A recent lawsuit in state court in Georgia is proceeding against General Motors on behalf of the survivors of Glenda Buchanan, a Georgia resident in her 40s who died in November 2014 when her Chevy Trailblazer allegedly drove itself off the roadway due to a defective steering sensor.  The sensor in question is part of the GM "StabiliTrak" system designed to monitor and control speed to help drivers avoid crashes.

The lawsuit alleges that a defective steering sensor failed to warn Ms. Buchanan of impending loss of control when her vehicle began to leave its lane, causing her to suddenly swerve, lose control, and roll the vehicle, resulting in her death.  The lawsuit further alleges that GM had been aware of this defect for years and had failed to warn drivers of the defect or recall and repair the problematic sensor.

Legal discovery in the case revealed that GM had processed more than 73,000 warranty claims for the defective steering sensor, representing more than 10% of all the vehicles manufactured with that particular component -- a shockingly high failure rate.  More than half a million vehicles with this steering sensor are still on American roadways, but no formal recall has yet been announced.

Mercedes-Benz recalled several thousand model year 2018 and 2019 vehicles in which steering wheel sensors failed to detect when drivers' hands were off the steering wheel.  These vehicles have automatic lane-centering and lane-keeping assistance systems and require drivers to keep their hands actively on the steering wheel to ensure they were still maintaining sufficient attention to conditions and control over the vehicle.  Unfortunately, the very sensors designed to make sure that drivers were remaining engaged with the automatic control systems were themselves failing to detect when drivers were taking their hands entirely of the wheel for extended periods of time.

Ford Mustangs from the 2020 model year have had two voluntary recalls issued related to camera problems.  The first was related to misalignment of the forward-looking camera used by the vehicle's driver assistance features, including adaptive cruise control and collision warning.  The second involved the rear cameras on the vehicles (and some other Ford models) in which faulty electrical connections made the camera views disappear either entirely or intermittently.

As this sample list of recalls and lawsuits illustrates, automated driving sensors and software involve many different components that must all work properly on their own and as integrated vehicle systems to improve safety rather than pose new dangers to drivers.

View this video sponsored by Honda that explains how its adaptive cruise control and collision avoidance systems use visual light and radar sensors:

Hello, my name is Ed Smith, and I have been an Auto Defects Liability Lawyer in Sacramento for nearly four decades. If you or a loved one has been injured in an accident involving a defective vehicle sensor, automated driving software, or other defective motor vehicle component, give us a call today at (916) 921-6400 or (800) 404-5400 for free, friendly advice.   You can also reach us through our online contact form.

We are members of professional groups, including the National Association of Distinguished Counsel and the Million Dollar Advocates Forum.

You can learn more about us by reading client reviews and reading about our past verdicts and settlements at:

Photo By: Julien Tromeur from Pixabay