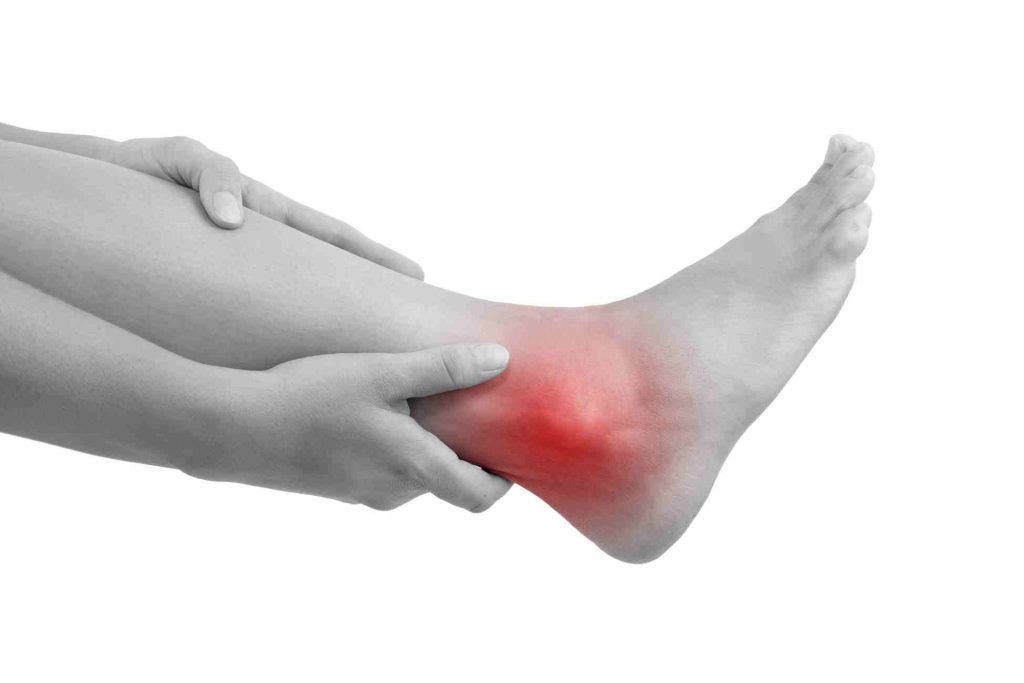 Ankle capsulitis can involve a disabling lack of ability to fully move the ankle instead of normal healing of the ankle. It can happen, for example, after a motor vehicle accident in which the ankle was severely affected by trauma. There can be osteochondral fractures with loos bodies in the joints and severe degeneration, which causes a “capsule” to form around the joint surface, effectively freezing the joint.

Table of Contents
What is Ankle Capsulitis?

Adhesive capsulitis is a joint disease that mostly affects the shoulder after an injury prevents the shoulder from moving and the joint capsule freezes the joint, resulting in a “frozen shoulder”. It can also occur in the wrist, hip and ankle. In the ankle, it is called having a “frozen ankle”. It is complex to diagnose and difficult to treat.

When capsulitis is in the ankle, it causes pain and there are restrictions in the range of motion, both passive and active. Eversion difficulty usually starts first, followed by internal rotation and inversion. Eventually, the loss of motion is global. It is usually secondary to trauma such as chronic ankle sprains, ankle fractures, or pilon fractures.

Some cases of ankle capsulitis are idiopathic or are believed to be related to having one of the following medical conditions:

When capsulitis occurs, it not only affects the site of the injury but eventually the entire joint capsule is affected with capsulitis, so that there is a complete loss of motion.

There is initially an outbreak of inflammatory cells in the synovium of the joint. After about 3-4 weeks, the capsular layer (fibrous layer) becomes thicker. It destroys the integrity of the posterior and anterior joint recesses and the presence of new collagen destroys the availability of the range of motion of the joint.

The growth of inflammatory infiltrates and the secondary ankle joint contractures are believed to be because of the presence of cytokines, which bring on the fibrous thickening of the joint capsule. Many patients will say they feel a sharp, stretching sensation associated with popping sounds or cracking sounds in the joint with any motion.

Ankle capsulitis is so difficult because it is so hard to treat. Most patients have these symptoms for many years without significant relief. The major symptoms of adhesive ankle capsulitis are:

Ankle capsulitis can be diagnosed through a careful history and physical examination, which will show a previous injury to the ankle that may have been weeks prior to symptoms of capsulitis. Sometimes the symptoms come on after the patient has “recovered” and attempts to resume weight-bearing after having the ankle in a brace, splint or Ace wrap for a prolonged period of time.

The doctor will look for obvious deficits of ankle range of motion associated with pain and swelling of the ankle joints. During the examination, the doctor will attempt the ankle dorsiflexion and ankle plantar flexion. With regard to dorsiflexion, its range was only about 1 percent and with plantar flexion, the range was only about 16 percent. In addition, there was atrophy of the calf muscle on the affected side.

Because it is a painful and invasive procedure, arthroscopy is not often used by doctors to diagnose capsulitis of the ankle. In addition, plain film x-rays are too nonspecific to show capsulitis.

MRI is increasingly coming into use in the diagnosis of ankle capsulitis. It often shows a lack of enough joint fluid and a thickening of the capsule of the joint. As this procedure is relatively new when it comes to diagnosing capsulitis, more research needs to be done to see if it is an accurate test.

Most people get better from ankle capsulitis following a course of physical therapy, which focuses on getting back an adequate active and passive range of motion. Joint mobilization techniques are used to increase motion while decreasing pain. People who have had 8 weeks of immobilization after an ankle fracture can undergo 10 weeks of physical therapy and can have the strength, range of motion and function of the ankle joint restored.

I'm Ed Smith, a Sacramento personal injury lawyer. If you or a loved one has suffered ankle capsulitis as a result of someone else's negligence and would like to discuss your legal options with an experienced Sacramento Personal Injury Attorney, contact us online or call us at 916.921.6400 or 800.404.5400 for free, friendly advice.

Editor’s Note: This page has been updated for accuracy and relevancy [cha 12.9.19]